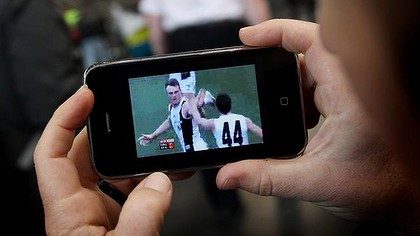 Media companies and sport governing bodies are expected to appeal a court ruling that has the potential to devalue sports broadcast rights.

The Federal Court found that Optus did not breach copyright law by allowing customers to record sporting events for playback on smartphones or computers.

TV Now lets Optus customers record free-to-air television from their smartphone or computer and watch it on the same devices with a delay as little as two minutes.

Justice Steven Rares found Optus did not breach any copyright related to Telstra's deal with the NRL and AFL to broadcast live matches on the internet.

The judge cited "time-shifting provisions" in the Copyright Act that let people record shows and watch them later.

Any appeal against the judgment is not likely until after the NRL and AFL seasons start next month.

The judge noted that some other issues in the case might still need to be resolved, stating "these include whether Optus infringes copyright because the technology used to make a recording in the format suitable for certain Apple devices creates and stores six temporary files of 10 seconds duration every minute and then deletes the first 10-second file as the latest one is added one minute later."

Justice Rares also said the case was not fully over until the parties resolved the matter of near-live streaming which the parties have agreed to treat separately.

In a statement, the AFL expressed its disappointment at the decision.

AFL Chief Operating Officer Gillon McLachlan wrote "we maintain that the Optus action is a breach of copyright.

"However, we are only in the preseason of this issue - it is highly likely we will appeal."

NRL boss David Gallop says the decision is "very likely" to be appealed, stating "it is a major concern as it clearly has the capacity to devalue the ability of the sports to sell exclusive rights."

Optus spokeswoman Clare Gill says the company was extremely pleased with decision, explaining "for us it's always been about free-to-air television, recording it and playing it back at a time more convenient, that's how we developed the product.

"It was not category-specific in anything to do with the categories of television, whether it be light entertainment, documentaries, news or sport.

"Optus is committed to delivering choice and convenience to Australians and the result of the TV Now court proceedings is a major win for consumers, innovation and the law."

The AFL, NRL and Telstra have been ordered to pay Optus's court costs.