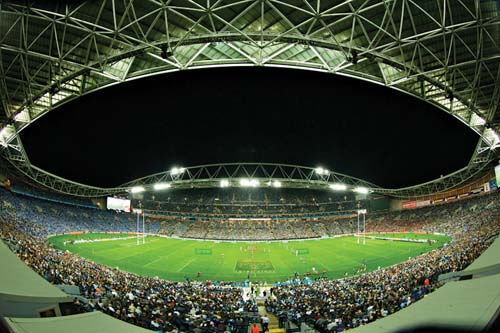 The opening weekend of the 2014 NRL season will see fans offered a free and uninterrupted Wi-Fi service at ANZ Stadium.

As a NRL triple-header kicks off the new season from 6th to 9th March, fans will be able to access free Wi-Fi (#scorefreewifi) at the ANZ Stadium following a partnership with Telstra and technology provider Cisco.

Promising to "change the event experience forever", ANZ Stadium is the first venue in Australasia to offer free Wi-Fi to all fans in and around the Stadium. At its simplest, the 'Connected Stadium project' will make it easier to make a phone call, send a text message or connect with friends on social media even at sell-out events.

But as fans connect via their mobile devices they also enter a vibrant interactive world that will feature a progressive rollout of rich digital content and technology to make their day or night at the Stadium easier, more enjoyable and infinitely more exciting.

The launch of Australasia's first whole-stadium Wi-Fi network comes on the back of a major transport initiative, with NRL Chief Executive Dave Smith announcing last week that tickets to all NRL games at ANZ Stadium in season 2014 will include the cost of train transport to and from Sydney Olympic Park. Further, there will be a minimum of two direct trains from Central to Sydney Olympic Park for every NRL game at ANZ Stadium, with the number of direct services varying depending on estimated crowds.

ANZ Stadium Managing Director Daryl Kerry said the combination of no-cost train travel and a free and robust Wi-Fi service were the first of many planned initiatives to take the live event experience at ANZ Stadium to the next level.

Kerry explained "there's nothing better than being at a game and the event experience is only going to get better for the fans.

"The new Wi-Fi technology will allow you to enjoy the biggest events live and continue to be digitally connected.

"From NRL opening weekend we will have a Connected Stadium one that will enable fans to share and engage with more content and more people from any device and from anywhere in the stadium."

Special Wi-Fi coaches will be in and around ANZ Stadium across NRL opening weekend to help fans with any questions relating to the new technology.

As the Wi-Fi features are rolled out this year across all sports and entertainment acts, fans will eventually be able to use their mobile devices to access rich digital content like replays and statistics, order food and beverages from their seats, and be rewarded for their game-day loyalty.

The new network will also simplify ticketing, help fans find the quickest way to their seats, and enable them to participate in and share live event action over social media from anywhere in the Stadium.

With more than 700 wireless access points, the ANZ Stadium network has been configured in a similar manner to Metlife Stadium, New York, which in February became the first Superbowl host to provide a high-speed Wi-Fi service. The ANZ Stadium service will also extend around the outside of the Stadium in Sydney Olympic Park to further enhance the visitor experience.

Kathy-Anne McManus, Media Practice Lead, Telstra Enterprise & Government, said the ANZ Stadium Connected Stadium project would have the flexibility to integrate with the latest generation of technology into the future, stating "this solution puts ANZ Stadium on par with some of the most iconic venues in the world."

"But the opportunities extend beyond content and sponsor benefits – a Wi-Fi network is just one part of the Stadium's plan to use technology to extend exclusive privileges to fans who attend games and to make their day run smoother.

"In the future we will be able to deliver traffic and transport tips customised to fans' needs and when they arrive at the ground they can be rewarded for choosing to attend the game, everything from seating upgrades, as well as exclusive food and beverage offers. The fans who invest in the live experience deserve to be treated like VIPs.

"The kick-off to this new era is upon us. It promises to be an exciting journey both for the Stadium and the hundreds of thousands of fans who pass through the gates each year."

The fun starts on the NRL opening weekend, with one lucky fan set to win what could be the greatest sporting prize offered this year – and just because they logged on to the new ANZ Stadium Wi-Fi service.

• One night's accommodation at the Novotel Sydney Olympic Park for two people for Origin II on Wednesday 18th June;

• One night's accommodation at the Novotel Sydney Olympic Park for two people for the NRL Telstra Premiership Grand Final on Sunday 5th October;