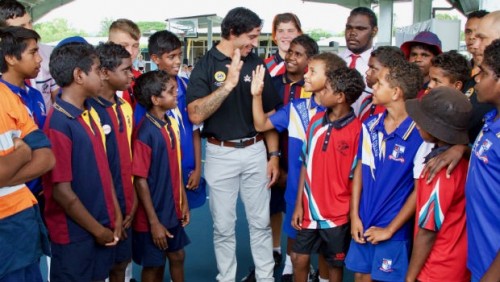 NRL Cowboys House has been officially opened in Townsville – delivering a facility that will provide significant benefits to Aboriginal and Torres Strait Islander families across Far North Queensland.

The facility, supported by a $9.5 million investment by the Australian Government, will help young Aboriginal and Torres Strait Islanders from remote areas in Queensland to complete their secondary education and access school-aged apprenticeships.

The first 25 students from remote communities around North Queensland have already settled into the House, built on land near the Pimlico TAFE College.

The young men, aged between 12 and 16, are living at the House being managed by the Cowboys Community Foundation which will provide a home for them as they move toward completing Year 12 in schools across Townsville.

Federal Minister for Indigenous Affairs, Nigel Scullion, said that NRL Cowboys House would give students from remote communities an opportunity to fulfil their potential, providing them with a chance to study, undertake training and find a job.

Minister Scullion stated “this is only the beginning and the hard work starts now. Governments can build the bricks and mortar but it is the people involved who will ultimately lead to successful outcomes.

“Next year, 25 more students from the remote communities will join the first intake at the NRL Cowboys House.”

The Queensland Government has also invested $317,500 to build a multipurpose all weather sporting facility, and will contribute an estimated $5.5 million in ongoing maintenance costs over the next 30 years.

Queensland Minister for Housing and Public Works and Minister for Sport Mick de Brenni said the House was a smart long-term investment for Queensland Government, adding “nothing has the power to transform lives more than education, and NRL Cowboys house is an innovative way of supporting young people through their final stages of schooling.

“That’s why the Queensland Government is investing in this project over the long-term, to help drive long-term success.

The University of Canberra’s Professor Chris Sarra, a member of both the Prime Minister’s Indigenous Advisory Committee and the NRL Commission, participated in the launch.

Professor Sarra said the new Townsville facility would provide the quality of care and support needed to ensure participating students reached their potential, explaining “Far North Queensland is rugby league heartland and students at NRL House can follow role models such as the Cowboys’ Johnathan Thurston and be anything they want to be.”

The National Rugby League has supported the North Queensland Cowboys Rugby League Club which, through its Cowboys Community Foundation, will run the House while the Queensland Government will also provide annual maintenance costs.”

For more information go to www.cowboysfoundation.org.au/programs