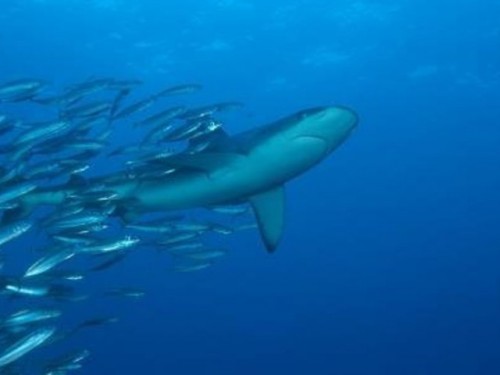 New Zealand has unveiled plans to create a South Pacific marine sanctuary the size of France, in a landmark deal to preserve one of the world’s most pristine and unique ocean environments.

Announcing the plans at the United Nations in New York on Monday, Prime Minister Key said the Kermadec area was home to thousands of important species, including whales, dolphins, seabirds and endangered turtles.

In a statement, Prime Minister Key explained  “the Kermadec Ocean Sanctuary will be one of the world’s largest and most significant fully-protected areas, preserving important habitats for seabirds, whales and dolphins, endangered marine turtles and thousands of species of fish and other marine life

“As well as being home to a wide range of marine species, the Kermadec region is one of the most geographically and geologically diverse areas in the word.

Covering a vast stretch of New Zealand’s exclusive economic zone, the sanctuary will prevent fishing and mineral exploitation in an area where scientists regularly discover new marine species. Conservation groups applauded the move, saying it added to a network of protected areas in the Pacific that now covered more than 3.5 million kilometres².

Among those who have lobbied the government to protect the Kermadec region are Titanic Director and some-time New Zealand resident James Cameron, Hedge fund billionaire Julian Robertson and US Secretary of State John Kerry, who has urged a step-up in marine protection worldwide.

The sanctuary will create a no-take, fully protected zone preventing all fishing and mining in the area, adding to the protections already in place. 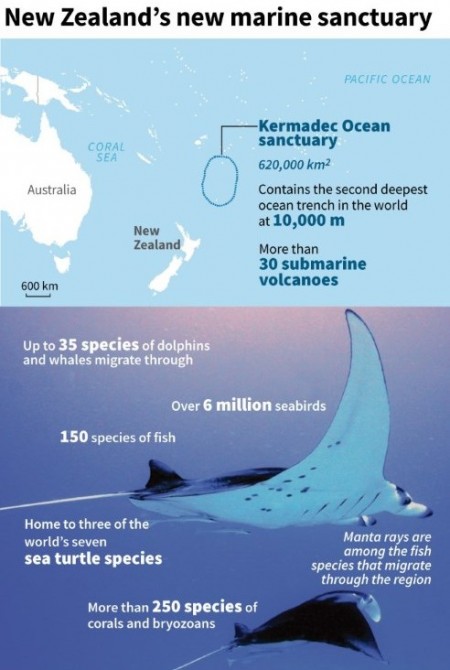 This week’s United Nations general assembly has focused on sustainable development as a critical goal this year.

New Zealand welcomed the focus on the sustainability of the world’s oceans and marine resources – a goal that Prime Minister Key said resonated strongly with the Southern Pacific were so many drew their food and livelihoods from the sea, Key said.

He added “New Zealanders value our coasts and oceans which are an important part of our culture, economy and environment and we are committed to managing them sustainably.”

Minister Smith stated “they make up 72% of the globe and are home to half of the world’s species but currently only two% is protected.

“There is increased pressure from over fishing, mining and pollution with the populations of fish and seabird species estimated to have halved over the past 40 years.”

Just as New Zealand had set aside significant areas of land like the Tongariro and Fiordland National Parks, it also needed to protect special areas of the sea like the pristine ocean around the Kermadec Islands.

The Kermadec Ocean Sanctuary is home to six million seabirds of 39 different species, over 150 species of fish, 35 species of whales and dolphins, three species of endangered sea turtles and many other marine species like coals, shellfish and crabs unique to the area.

The new sanctuary will extend to the 200 nautical mile limit of New Zealand’s exclusive economic zone from Raoul Island in the north to L’Esperance Rock in the South.

All forms of fishing and mining will be prohibited.