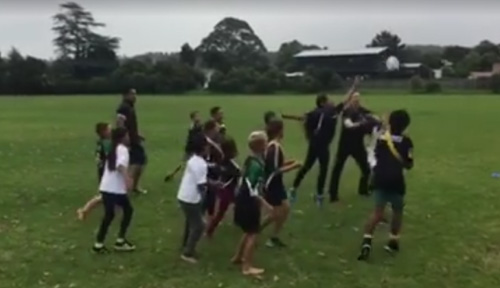 Introducing the program, Dr Coleman stated “the Rugby League World Cup 2017 Education Resource is a range of curriculum-based learning and teaching resources for primary and intermediate students in Years 1 to 8. It’s a fun and interactive way to promote learning through rugby league.

"The programme includes engaging classroom ideas that can be used across the curriculum, including physical education, maths and science.

"As well as helping children learn and develop leadership skills it also helps them develop a life-long love of sport and physical activity.

"The programme complements the wider work underway to tackle childhood obesity through the Childhood Obesity Plan.

"It has been developed as part of the legacy from New Zealand’s co-hosting of the Rugby League World Cup 2017 and is a great example of what the broader benefits can be of hosting major sporting events."

The education resource was developed in conjunction with the New Zealand Rugby League and further information can be found at www.nzrl.co.nz