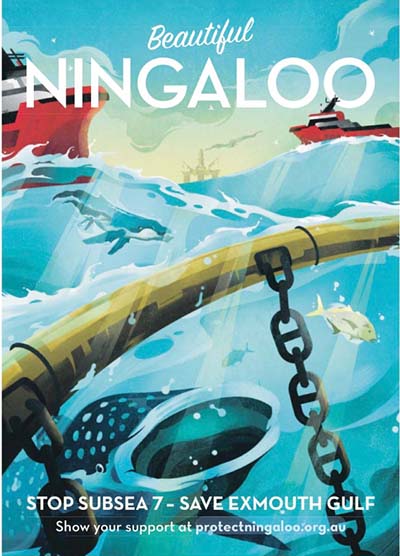 The campaign is designed to alert the broad community to the risks posed by a massive oil and gas pipeline fabrication facility and towing operation earmarked for an undeveloped, highly biodiverse part of Exmouth Gulf, Ningaloo, prized by tourism businesses, locals and scientists, alike.

The campaign has commenced with a series of major print, radio and online advertisements, and the mass distribution of postcards across Perth.

Paul Gamblin, Director of Grass Roots initiative, Protect Ningaloo advised that this marked the beginning of a major new phase of the campaign to protect Exmouth Gulf, Ningaloo and advise “we’re up against Subsea 7, a multi-billion-dollar global corporation, so it’ll be a David and Goliath struggle but we’re determined to protect our beautiful Ningaloo.”

“For two years, we’ve implored Subsea 7 to do the right thing by withdrawing their controversial proposal and avoiding harming Exmouth Gulf, Ningaloo. But it’s been to no avail. So now we need to ramp it up.”

Protect Ningaloo are supported by an alliance of community groups and charities. Cape Conservation Group is a volunteer organisation based in Exmouth. The Conservation Council of WA is the state’s premier environmental NGO. The Australian Marine Conservation Society is the nation’s peak marine charity. All of these groups were members of the historic Save Ningaloo Reef campaign that ran from 2000-2005.

Protect Ningaloo are supported by scientists, researchers, tourism operators, rec-fishers, birders and enthusiastic amateur nature lovers from all over the world.

In addition to full-page newspaper advertisements, and on AM and FM radio, online promotion and a giant ‘postcard’ mobile billboard, the Protect Ningaloo campaign is distributing postcards initially to around a quarter of the households in the wider Perth metropolitan area, and posters to venues across the State.

Gamblin adds “tens of thousands of people have already joined our campaign and this enormous support means we can now take up the cause in a much bigger way than ever before. Ningaloo-Exmouth Gulf is a special place to so many people – it’s a beloved part of our shared heritage - which explains the torrent of letters that people have sent to Government asking it to stop industrialisation of this area.

“It’s just common sense to protect the ecosystem that supports the region’s famed tourism industry which sustains the bulk of jobs there. Scientists are regularly discovering new natural wonders in Exmouth Gulf, and if we look after it, it will generate tourism, education and research jobs for decades to come. It’s time to draw a line in the sand and stop heavy industry from getting a foothold at Ningaloo.”

The Protect Ningaloo campaign understands that instead of risking Exmouth Gulf, Ningaloo, oil and gas pipelines can be deployed offshore as per current practice, or industrialised sites in the Pilbara could also potentially be used, meaning the Subsea 7 proposal for Exmouth Gulf is unnecessary.

Gamblin also notes “to know that pipelines can be deployed from ships or potentially from industrialised areas in the Pilbara is another reason observers are incredulous that the proposal for Exmouth Gulf ever got off the drawing board.

“The ball is in Subsea 7’s court. It can withdraw this highly controversial proposal at any time, and should do so now. Subsea 7 could still be doing business in the North West without risking one of our most precious natural and tourism assets. It’s time to end the uncertainty, and protect Beautiful Ningaloo.”