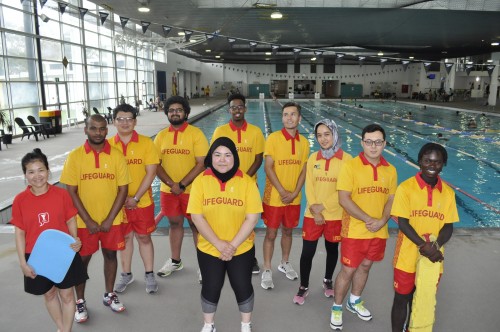 Collaboration between the YMCA and Life Saving Victoria (LSV) has resulted in the training and employment of a group of young multi-cultural lifeguards at City of Greater Dandenong aquatic centres.

Aimed at the Culturally and Linguistically Diverse (CALD) community and supported by the Greater Dandenong Council, the CALD Aquatics Pathway Program has recently undertaken its second intake of four members.

Qumbri who came to Australia with her family in 2010 said the program had provided her with a chance to progress and make a career in the aquatics and recreation industry.

She explained “my two younger sisters became surf lifesavers and I became interested in doing lifeguarding through them. I joined the program and completed the training and now work at Dandenong Oasis and have also done shifts at Noble Park (Aquatic Centre) and Casey ARC.”

Qumbri, who is Muslim and wears a hijab, said she felt she was approachable to Muslim women and others who were shy to ask questions due to cultural barriers.

She added “other women and Muslims sometimes feel more comfortable talking to me than they would someone else and they often ask me questions. I am able to help and that is very satisfying.

“I like talking to people and helping them and that is a big part of this job."

Qumbri added that her family and community were very proud and that the position was one where she felt equal and was treated that way by everyone.

The program is co-funded through YMCA Open Doors and Life Saving Victoria.

Explaining how the program is evolving with new elements being added, Dandenong Oasis Manager Trudy Micallef stated “the aim of the program is to have participants ‘pool deck ready’ when jobs come up.

“Cultural and language differences can sometimes mean there is confusion and even a lack of trust between pool users and lifeguards. Having access to lifeguards from the same background with the ability to explain and communicate in the same language is a huge positive in these situations.”

LSV Multicultural Projects Manager David Holland agreed and said program candidates were identified in classrooms, through local communities and even on the beach.

Holland commented “they are typically people who show an interest in aquatics and aspire to be role models or leaders within their communities.

“The program components are designed to provide training according to each participant’s needs with the each becoming proficient in every area and then practicing their skills through volunteering before entering the workforce.

“It encourages inclusion and recognises diversity. The results in the City of Greater Dandenong have been outstanding and we are very keen to extend this to other CALD and multi-cultural communities.’

The next intake will see four 17 year-olds; Afghans Murtaza Naseri and Sarah Qumbri, Hellbert Pemba from Malawi and Sudanese-born Nya Gach Loch join the YMCA as volunteers with a view to gaining employment.

Image: Emma Qumbri (front) with the new group of young, multi-cultural lifeguards who successfully completed the CALD Aquatics Pathway Program and are now employed by the YMCA.