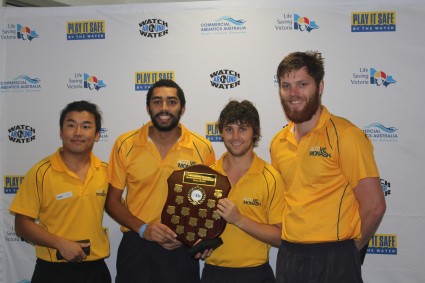 16 teams, representing 30 Victorian aquatic facilities, put their rescue and response skills to the test in the competition which aimed to challenge lifeguards’ abilities in a practical, safe and fun environment.

Teams responded to a series of simulated scenarios, including managing patients who had lost limbs, been exposed to hazardous chemicals and endured crush and spinal injuries as well as conducting water rescues and treating non-breathing casualties.

The scenarios were designed to not only test the technical skills of the individual team members, but also their overall teamwork, communication and incident response capabilities.

Explaining that the intention of the event was for the competitors to expect the unexpected, LSV Event Manager Andy Dennis stated “the scenarios our competing lifeguards were faced with were difficult but realistic; they could easily occur at their own aquatic facilities.

“We also introduced a variety of twists and complications throughout the different scenarios, in addition to the initial incident.

“These varied from scenario to scenario and included nosey customers, screaming children and patrons going into shock.

“These additional challenges were designed to ensure that the staff gave consideration to the wider operating environment, as well as the initial incident or injury.”

To test stamina and general water skills, the teams took to the pool for race events, including obstacle, rescue tube and manikin relays. A line throw challenge was also completed by each member of each team.

The event scenarios were judged by accredited LSV trainers, who were able to provide immediate feedback on development opportunities to the participants following each scenario. The scoring was heavily weighted towards the scenarios, as well as the theory paper, with the race events accounting for a smaller percentage of the overall score.

The training representatives from these successful facilities will be engaged to present at the 2015 LSV Safety Summit later this year. The aim is to share their experiences of incident response and provide an overview of their own in-service staff training processes.

In addition to acknowledging the support of Commercial Aquatic Australia, LSV would also like to thank the team at Casey ARC and Sport and Education Development Australia (SEDA), for providing the event venue and support staff.

The Pool Lifeguard Challenge was inspired by the competitions run annually in Western Australia by RLSSA (WA), which Commercial Aquatics Australia has supported for a number of years.

Teams wishing to enter in 2016 are encouraged to commence their preparations early to ensure their training plans cover the full range of skills that the lifeguards may need to call upon in the event of an emergency.

For more information on the Pool Lifeguard Challenge go to www.lifesavingvictoria.com.au

Image shows the winning team from the Monash Aquatic and Recreation Centre.