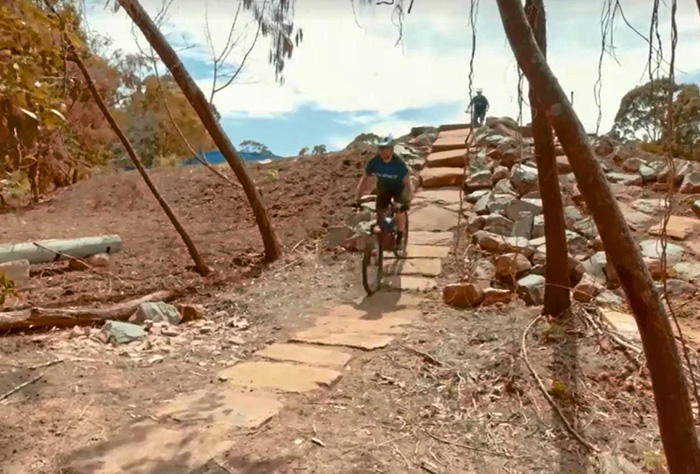 Minister for Sport Mick de Brenni said this was a mountain bike trail built for riders by riders, with local riders and trail builders Trailworx leading the construction team.

“All this packed into a heart-stopping 900 metres set in natural bushland only 10 minutes from some of the best beaches in the world,” said Minister de Brenni.

“The 12km of trails in the reserve suit all levels of skill, from beginners to experienced riders and are used about 600 times a week.”

Minister de Brenni took a ride along the new trail this morning with the Caloundra Off Road Cycling Association (CORCA) to put it to the test.

“This is a great community club that works hard to encourage participation for all skill levels.

“This lines up with the Queensland Government’s Sport and Active Recreation Strategy, which will be released next year, aiming to increase participation across activities and sports.”

“Our stunning natural environment continues to be a drawcard for visitors to the region and a magnet for locals who love to get outside and enjoy their surroundings,” Mayor Jamieson said.

“Sunshine Coast Council is proud to work with our local community and the Queensland Government to develop an innovative new offering to a growing sector of the tourism market.”

CORCA president Stephen Ossedryver thanked the Queensland Government and the Sunshine Coast Council for the funding.

“The new Beez Kneez trail will become a major drawcard for the Caloundra region and I believe it will get 60,000 rides per year,” Mr Ossedryver said.

“The club has 210 members and the new track will help us boost membership, particularly the Women on Wheels (WOW) and Young Guns clubs.”