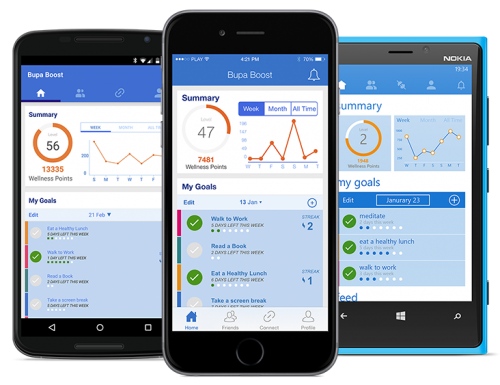 As part of its purpose is to help Australians live longer, healthier and happier lives, Bupa has launched a fitness tracking social app designed to increase workforce wellbeing.

Described as a first in healthcare provider says is a first for the health industry, the app, called Bupa Boost, will allow the user to track data from wearable devices or by manual input; set personal goals, from weight loss targets to leaving the office by a certain time; participate in team challenges; and interact with colleagues by messaging via the app or liking each other’s progress updates, for example.

While the market for digital fitness tracking is growing increasingly crowded, from apps such as Apple Health to wearable devices such as FitBit and Jawbone, Bupa believes this is “the first app designed specifically to support employers to improve the health and wellbeing of their workforce”.

Through Bupa Boost, the user will have access to health information, and in the app's next stage of development, virtual coaching from a qualified person.

Bupa spokesperson Patrick Watt says the app gives users the ability to not only track vital data but to learn how to improve them by connecting with a healthcare professional.

Watt explains “there are loads of health trackers out there, but they're from digital companies, not healthcare providers.

We're not competing in that space."

Watt believes tthat the app is likely to create a necessary and fundamental change in Bupa’s business model, both on a commercial level and in terms of how the company engages with its consumers.

Bupa Boost complements the insurers other services which have an increasing emphasis on health and wellness initiatives, particularly in workplaces.

• Foodswitch: lets users scan a food item’s barcode to advise of its nutrient contents and if there are healthier alternatives. Developed in partnership with The George Institute
• My Diabetes Coach Program: aims to simplify the self-management of diabetes and to reduce the risk of developing serious complications. Built through collaboration between the Bupa Health Foundation and technology company Clevertar
• Bupa Beginnings: an interactive guide to the Australian health system when having a baby
• BrainyApp: helps you rate and track your brain health. Developed by Alzheimer's Australia in partnership with Bupa Health Foundation

Bupa also provides its members with a range of offers with fitness partners giving access to clubs, programs and group fitness classes.

For more information go to www.bupaplus.com.au/fitness