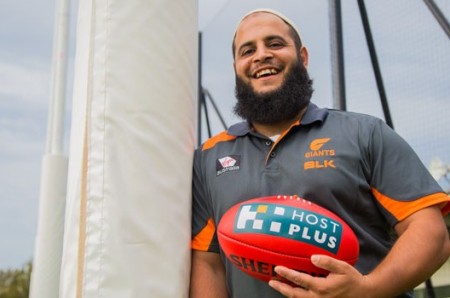 Greater Western Sydney GIANTS Head of Community Ali Faraj was among the winners at the 2015 Australian Migration and Settlement Awards - being named Case Worker of the Year at a ceremony held in the Great Hall of Parliament House in Canberra on Monday night (17th August).

With the role sport plays in helping Australia's social cohesion just one of the many fields being recognised in the annual Migration and Settlement Awards.

Faraj was recognised for his extensive work with the multitude of multicultural communities in Western Sydney and his knowledge and experience of multicultural issues and helping deliver harmony and social cohesion outcomes.

Faraj has been instrumental in setting up Giants Care, the club's groundbreaking community program that has seen the Giants double its community initiatives in Sydney's west.

Giants Chairman Tony Shepherd paid tribute to Faraj following his win, stating “Ali works very closely with the communities that make up Western Sydney and this award is great recognition of his dedication.

“I am proud of the work the Giants do in the community and Ali is a huge part of this.

“Social Cohesion is a key area of our club and in particular Giants Care and through this program Ali is helping us further enrich the lives of many people in Western Sydney."

Faraj, a former teacher, explained how the GWS Giants' outreach program targeted young people in the area and helped them understand what it took to succeed in Australia's culturally diverse society.

Prior to receiving his award, Faraj told the ABC "participation is important - it is important to get young people from different cultures together first and foremost, and for them to be educated about what exists out there in our society."

Faraj said it was important for teenagers to feel they belonged, stating "some kids do feel alienated, but I guess it is from a lack of connection with different cultures and different faiths, but we hope at the GWS Giants that we bring all cultures together."

The Australian Migration and Settlement Awards are organised by the Migration Council of Australia and recognise the contribution of organisations and individuals in supporting migrants settling in Australia.

Council Chief Executive Carla Wilshire, said the national awards were all about recognising those who helped migrants settle in Australia, telling the ABC "inclusion is particularly important for new communities because it is the pathway to becoming an Australian.

"We have to build, we have to actively foster community within Australia."

It is the third time the Migration Council Australia has hosted the awards.

In 2014, the GWS Giants’ promotion of the AFL Multicultural Round was recognised at the Sydney Opera House.

For more information on the Migration Council of Australia and its Migration and Settlement Awards go to www.migrationcouncil.org.au/awards