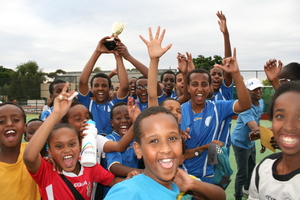 Sports codes should consider the needs of migrants if they want to attract players and supporters, says a new report by Massey University sociologist Professor Paul Spoonley.

Women's sports, such as netball and hockey, need to recognise the cultural requirements of Muslim women in their dress codes if they are to benefit from the growth in immigration from non-traditional sources.

In a report entitled Sport and Cultural Diversity; Responding to the Sports and Leisure Needs of Immigrants and Ethnic Minorities in Auckland, commissioned by the Auckland Regional Physical Activity and Sport Trust, Professor Spoonley raises a series of issues sports organisations need to consider as the migrant population of greater Auckland reaches 40% of the total.

Some sports, such as table tennis and badminton, have gained players and support from the increased cultural diversity while others, such as rugby and netball, have been less responsive to the new demographics.

Professor Spoonley explains "some sports have gained new membership, coaching and sponsors without having to do very much. Others have actively sought to change what they do in order to accommodate these new members of their sporting community.

"At the other end of the spectrum are some sports which have yet to appeal to some of these ethnic and migrant groups.

"Some are reluctant and a few even hostile to expanding what they do to include ethnic and immigrant communities."

Until the late 1980s, the bulk of New Zealand's migrants came from Britain, Ireland and the Pacific. In the past two decades there has been an influx of immigrants from Asia and South Africa, with smaller numbers from Africa, the Middle East and Eastern Europe.

Professor Spoonley spoke to a wide range of sports to find out what they are doing to meet the needs of the migrant community interviewing people from different ethnic groups, and discovered they had created not only their own teams but in some cases their own clubs. These include little-known games and sports from their homelands, such as the Korean Ssireum, a traditional form of wrestling. Others have set up separate clubs, such as the New Zealand Chinese Table Tennis Association, which has 750 members, and organises social gatherings around important dates in the Chinese calendar.

The Korean Sports Society provides information in Korean language on skiing and snowboarding, bowling, hunting, tae kwon do, soccer, basketball and golf. Muslim women have set up the Muslimah Sports Organisation to promote women-only netball, volleyball and swimming for Muslim girls reluctant to join a New Zealand code because they are required to have short skirts and bare arms.

Spoonley concluded "the bottom line is that super-diversity is here to stay and should become part of the strategic and delivery mechanisms of any Auckland-based organisation, sporting or otherwise."

Trust Chairman Colin Dale says the region's local authorities and sports bodies wanted to know how to respond to the changing leisure and sports needs of their communities, stating "there are many social, health and well-being benefits for individuals and communities from active participation in sport and recreation."