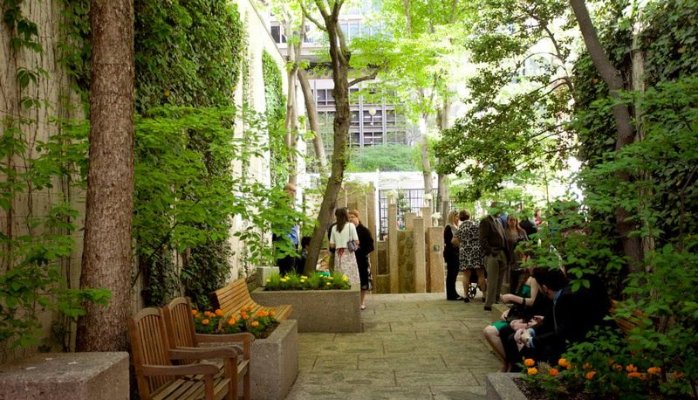 The City of Melbourne has advised that four laneways in the centre of the city have undergone a green makeover as part of the $1.8 million Green Your Laneway pilot program.

Councillor Oke advised “by harnessing the enthusiasm of local residents and businesses, we’ve converted these laneways from a place for garbage trucks to move through to green community spaces.

“A lot of work has been completed underground, creating innovative infrastructure to capture and clean rainwater that will sustain the laneways’ plants and trees as they grow and create green coverage, provide shade and improve air quality.

“Melbourne is famous for its laneways - we have over 200 of them - and this project shows how we can utilise the space to make our city greener, more sustainable and take action to cool the city.”

This summer has seen a number of Heat Health Alerts issued by the Victorian Government’s Chief Health Officer, a stark reminder of the importance of cooling our climate and preventing extreme heat events.

Councillor Oke added “we've got a target to cool the city's summertime temperatures by four degrees and through our award winning Urban Forest Strategy and projects like Green Your Laneway we’ve made great progress.

“But we can’t do it alone; we need everyone's input to help Melbourne become a city of sustainability.”

The laneways were selected based on more than 800 public nominations and expert advice from a panel of engineers, sustainability professionals, place-makers and landscape architects.

The City of Melbourne worked closely with the business owners, residents and workers to consider which type of greening would suit each laneway and three of the four laneways have been partially closed to vehicles or have been made one-way to improve amenity for pedestrians.

Coromandel Place
The laneway has been transformed with 14 planter boxes featuring Boston Ivy and Creeping Fig which are expected will cover the walls with greenery within around five years. Important work in the laneway has been completed underground; the bluestone kerbing and asphalt was dug out by hand and replaced with new soil and irrigation systems to allow the new plants to thrive. Where greening was not possible due to underground services and traffic requirements, murals have been incorporated to beautify the laneway. The works in Coromandel Place include a two-story mural by Ghostpatrol and a separate mural by Al Stark on the walls of the Uniting Church. A Native Frangipani tree in a specially built tree planter will also feature artwork by Ghostpastrol to match to the two-storey mural.

Guildford Lane
Climbing plants, 70 pots and window boxes, and a compact green roof installed above a small garage now adorn Guildford Lane’s brick warehouses. A community garden has been installed featuring eight innovative drain gardens to capture rainwater and reduce flooding. These drain gardens are believed to be the first installed in Melbourne’s CBD and utilise stainless steel grates to intercept down pipe water to filter out pollution that has settled on the roof. Water captured from the drain gardens will nourish the Gum Vines, Chinese Star Jasmine and other hardy species planted in the laneway.

Meyers Place
Four Weeping Figs and four Native Frangipani have been planted to create greenery around Meyers Place cocktail bars and restaurants. Creeping Fig has been planted on the seven storey carpark and a 20 kilolitre rain tank will capture rainwater from the carpark roof to prevent flooding and provide irrigation for laneway plants. A large jungle themed mural by street artist Mike Makatron has been completed at the Bourke Street end of the lane and a partial road closure carried out in December 2017 has created a new 180 metre² pedestrian space.

Katherine Place
Seven Firewheel Trees have been planted in advanced tree pits designed to intercept stormwater and remove nutrients such as nitrogen and phosphorus, from stormwater before they pollute our waterways. Ten Creeping figs have been planted in steel planters and within a few years these are expected to have covered the bare archways. Food businesses along the lane have been given pots and window boxes to bring colour and greenery to the streetscape.