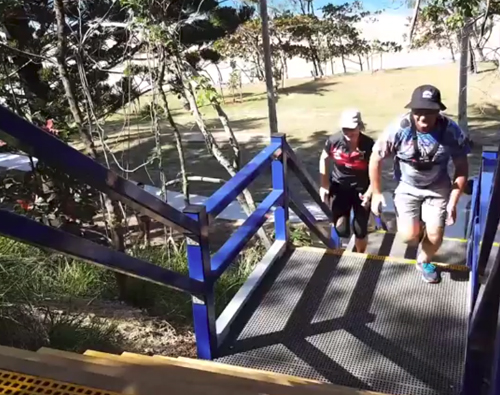 The Mackay City Council has reopened a set of stairs at Blacks Beach popular with fitness enthusiasts.

Popularly known as ‘Hell Stairs’, the 72 individual steps, covering a 20.5 metre incline, are a popular feature for boot camps and fitness classes in the area.

However, having deteriorated in recent years, Mackay Regional Council commenced an upgrade program in April.

The $430,000 stairs are made from pre-fabricated composite fibre, which is both fire-proof and cyclone-rated.

In addition to upgrading the fitness stairs, other work recently completed at Blacks Beach Park included the installation of an all-abilities beach access ramp, a new path and a beach shower fitted with a drinking bubbler and dog bowl.

A new picnic setting was also installed beside the sheltered playground, as well as landscaping, the installation of a disabled parking bay and changes to the existing carpark to maximise the number of available parking spots.

tested out the new stairs this afternoon in their best active wear and have given them the tick of Councillor Gee said he expected the stairs to become a regular addition to local boot camps and residents’ fitness regimens, commenting “these steps may be even more challenging than the previous stairs.

“It takes almost 100 steps, which traverse up a 20- metre incline, to reach the top and it is not for the faint-hearted.

“The upgrades have not only improved the safety of the stairs, but they make exercising a more enjoyable experience, especially when a friendly race between friends or a fellow councillor is involved.”

The upgrades are part of a larger plan for Blacks Beach, which involves expanding on the existing infrastructure at Camilleri Street Park to provide additional facilities, such as public toilets, barbecues and new facilities catering to older children and teenagers.

This project has been funded by the Queensland Government’s $200 million Works for Queensland program.