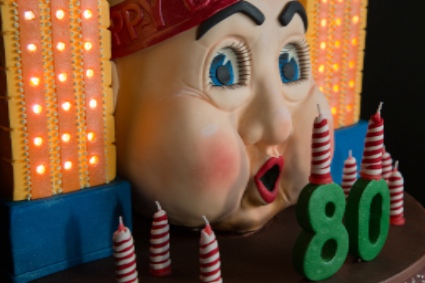 Political and business leaders and special guests were treated to a wonderful night of celebrations and entertainment, including entrées and champagne served while riding on the spectacular Luna Park Ferris Wheel.

The night also marked the opening of the international award-winning Ferris Wheel Dining Experience, which will open to the public from Sunday 11th October until 20th March next year.

After dining, Luna Park Sydney Director, Warwick Doughty, referred to Luna Park Sydney recently winning the award for the best Function Caterer (Sydney Metropolitan) at the prestigious Restaurant and Catering Awards for Excellence and then commemorated this milestone with the cutting of a specially designed birthday cake.

Luna Park Sydney first opened its doors to the public on 4th October 1935 to a 45-metre-long queue buzzing with eager Sydney-siders. With the flick of a switch, Luna Park’s famous grinning face blazed into life with the help of thousands of neon coloured lights.

Today, alongside a number of state of the art modern refurbishments, the park has managed to preserve its authenticity and 1930s style design. Luna Park Sydney has the honour of being one of two amusement parks in the world that is protected by government legislation, and has truly become an iconic part of Sydney and its picturesque harbourside.