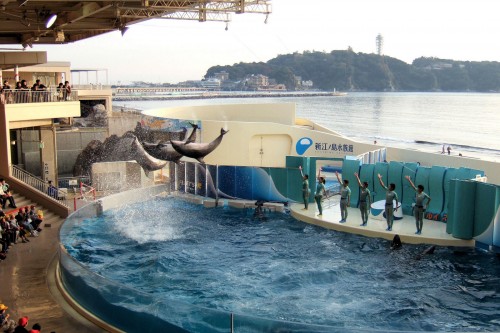 Two aquariums in Japan have left the Japanese Association of Zoos and Aquariums (JAZA) over the organisation’s decision to ban members from procuring dolphins from controversial drive hunts, specifically those that take place in the sea near the the town of Taiji in Wakayama Prefecture.

The two aquariums have said they do not agree with the ban.

The ban came into effect in May 2015 after pressure from the World Association of Zoos and Aquariums (WAZA) to stop acquiring dolphins captured in the Taiji dolphin hunts.

JAZA members voted to implement the ban and remain part of the global organisation, but not all members were happy with the outcome, with almost two-thirds of members opposing the motion.

The drive hunts take place in the whaling town of Taiji when pods of migrating dolphins are herded into shallow waters by fisherman, where they are slaughtered with knives or captured to sell to aquariums.

The practice was brought to the world’s attention by the documentary film The Cove, which shows the brutal manner in which the highly-intelligent cetaceans are being hunted every year.

The Japan Times reported that the two aquariums are the Enoshima Aquarium in Fujisawa, Kanagawa Prefecture, and Shimonoseki Marine Science Museum (Kaikyokan), in Yamaguchi Prefecture.

The report said Enoshima Aquarium, which is researching cetacean breeding, did not want to damage its relationship with Taiji’s fishermen and Shimonoseki Kaikyokan said it believes drive hunts are a legitimate practice.

Aquariums in the Middle East and China are known to acquire dolphins from Taiji.

Around 30 of JAZA’s members have a combined total of 250 dolphins in their facilities, around half of which were procured from the town of Taiji.

Those who support the drive hunt say they do not see it as cruel and say it is a sustainable fishing method, with the cetaceans usually sold for their meat.