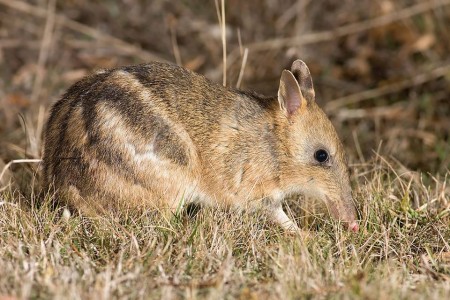 16 Eastern Barred Bandicoots have recently been released into a new home on Churchill Island in Phillip Island Nature Parks, as part of a trial program designed to save the species from extinction.

Considered extinct in the wild on the mainland since 1991, this small marsupial has been surviving behind predator-proof fences designed to keep them safe from foxes and feral cats. Thanks to Phillip Island Nature Parks’ efforts over the past 10 years to ensure Churchill Island is fox and feral-cat free, the 57-hectare island in Victoria’s east is considered to be ideal habitat for Eastern Barred Bandicoots.

The suitability of the island will be assessed over two years with the findings informing potential future releases of Eastern Barred Bandicoots onto larger fox-free islands, such as Phillip Island and French Island.

The trial release is part of a wider program aimed at saving the Eastern Barred Bandicoot from extinction, including a $146,800 gene pool widening project that will mix captive-bred Eastern Barred Bandicoots from Victoria with individuals from the Tasmanian sub-species to increase genetic diversity amongst the Victorian population, which has suffered due to their critically low population size.

The project has been supported by the Victorian and Tasmanian Governments, the Federal Government and Zoos Victoria.

The Australian Government contributed $55,000 to this project as part of the action plan under its new Threatened Species Strategy.