Hong Kong Stadium playing surface to be rebuilt next year 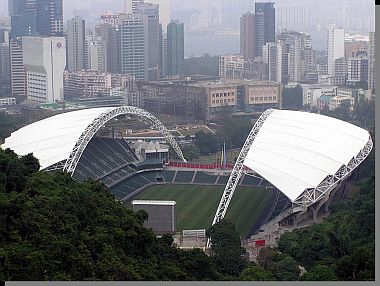 The much criticised playing surface at the Hong Kong (So Kon Po) Stadium is to be rebuilt next year.

Hong Kong’s Leisure and Cultural Services Department will work with the Jockey Club to reconstruct the turf pitch – desciribed as an “international embarrassment” after its poor state during fixtures last year - from April to September 2015.

The reconstruction will remove the existing turf and soil, put down new layers of sand and turf and replace underground irrigation and drainage systems.

The Jockey Club Charities Trust will finance the reconstruction committing HK$31 million to the project.

A Jockey Club spokesperson told the South China Morning Post “as a major sports provider itself, the Club has long been committed to supporting local sports development.”

Adding that the Stadium as a key facility for global sporting events, the spokesperson said the Club would provide full technical and financial support for the project, including engaging specialist consultants and contractors.

The spokesperson continued "(the Club will) share its expertise and experience in turf track construction and management and implement the reconstruction project with the government … to enhance the quality of the pitch and strengthen the city's ability to host international sporting events."

The pitch reconstruction is expected to take five month.

The playing surface at the Stadium was described as a "killer pitch" by British media in July last year when it became sodden and muddy after days of torrential rain before the Barclays Asia Trophy soccer tournament and a Manchester United friendly match. Bald patches appeared in the centre of the field where grass had been kicked up.

With uncertainty and delays surrounding the development of a new Hong Kong stadium on the Kai Tek airport site, and So Kon Po Stadium’s poor reputation, many Hong Kong opinion formers are concerned that the city is losing out to developments such as the new Singapore Sports Hub when attracting international events.