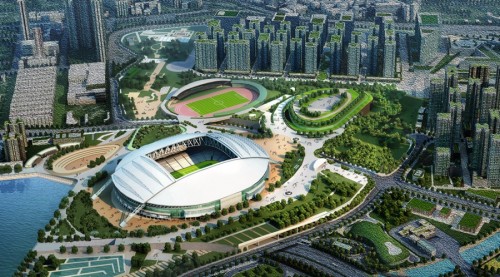 The Hong Kong Government is expected to issue a full tender for delivery of its planned Kai Tak Sports Park in the middle of next year.

Alastair Graham, Director KPMG Hong Kong, told delegates at the last week’s Stadia & Arena Asia Pacific 2016 conference and exhibition in Japan that the development of the sports facility is in line with the Government’s objectives for sport in Hong Kong, covering community sport, elite sport and top-class events.

Located on the harbourside in Kowloon, the Hong Kong Government plans to use around 8% of the former former Kai Tak Airport for a 50,000-seat sports stadium with a retractable roof, a public sports ground with seats for at least 5,000 and an indoor arena with 10,000 seats.

Explaining the process that the Hong Kong Government  is going through, Graham stated “in terms of timeline, the project is now going through the last two stages of financial approval.

“There is a penultimate stage which is ongoing at the moment.

“Assuming that is successful we will then go out to prequalify to consortium and we envisage the prequalification documents should be issued in the first quarter of next year, in January or February.

“At the same time the project will go through the final stage of full approval for financing. Once that full approval is given, which is envisaged to be in the middle of next year (July/August) we will then go out to those bidders who have prequalified for the full tender.

“The tender process will not happen until the full financial package is agreed by government.”

Graham added that during 2016 a two-month program of public engagement has been carried out.