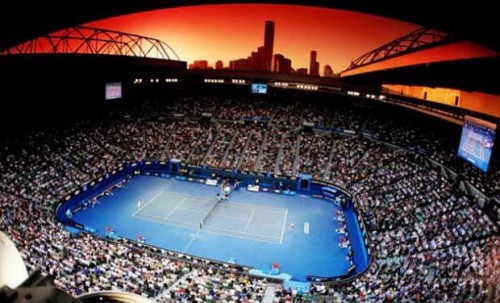 Day four of the Australian Open has seen tournament organisers enact its extreme heat policy the first time that policy has been introduced this year.

The ruling means current matches being played will be suspended at the conclusion of the set and no scheduled matches on outside courts will start until conditions improve.

Several players wilted in the conditions today, with women's world number 50 Varvara Lepchenko forced to take a medical time out.

The American had won her opening set against Simona Halup, but was demolished 6-0 in the second set and trailing in the third when she had to get treatment.

The enactment of the extreme heat policy will come as a relief to other players, with Australian star Samantha Stosur on Wednesday night urging Open officials to apply some common sense if forecast temperatures of 44 degrees hit Melbourne Park today.

Stosur explained "I think players and everybody involved have to be really careful. You've got to do what you can to obviously go out and play as best you can.

"If it's not cooled off, then you've got to really do the right things.

"I think there's got to be some common sense, whatever looked at, because you don't want it to get dangerous and have somebody getting hurt because of it."

A number of stars at the Australian Open have reacted on social media to the staggering temperatures.