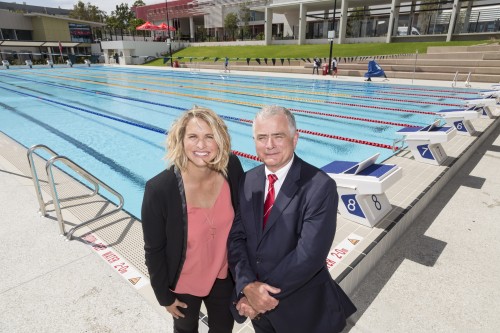 Open to staff, students and the general public since February, the new Aquatic and Fitness Centre at Griffith University’s Gold Coast Campus has been officially opened.

Griffith University Vice Chancellor and President Ian O’Connor said the $16 million facility is the perfect venue for competition, training and recreation, explaining “this magnificent facility complements our ever expanding Gold Coast campus and is a welcome addition to the first class sporting amenities already available on the campus.”

The Olympic-sized pool, with FINA-approved starting blocks and electronic timing, features an S.R.Smith SwimWall Systems™ bulkhead in the middle which enable the pool to be split in two allowing for multi-purpose activity at either end without disruption.

Officially opened by Queensland Treasurer Curtis Pitt as part of a range of events to mark the one year countdown to the start of competition at the 2018 Gold Coast Commonwealth Games, the pool is set to attract national teams keen to use the facility to prepare and train for the big event.

Professor O’Connor added “Griffith played a major role in Queensland’s last Commonwealth Games in 1982 with our foundation campus at Nathan hosting the Games Village as well as other important services.

“Now 35 years on, we have a special relationship with the 2018 event and look forward to contributing to what we expect to be one of the most remarkable Games in history.”

Griffith University is an official Games partner and the first university in history to partner with the Commonwealth Games.