Geelong commits to Aquatics and recreation 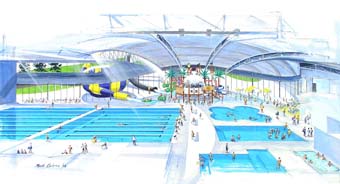 As part of a wide-ranging commitment to providing modern sport and recreation facilities, the City of Greater Geelong is investing heavily in improving its aquatic centres.

As the City’s General Manager - Community Infrastructure and Recreation, Dean Frost explains “to encourage healthy and active communities you need to have high quality sport and recreation facilities that are easily accessible,”

“Over the past five years, the City has invested $45 million in improving aquatics infrastructure alone. These new and upgraded facilities are making it easier for Geelong’s 200,000-plus residents to live active lifestyles.”

The City is already seeing a return on investment, with its Swim, Sport and Leisure and Learn to Swim combined membership now at a record 16,000 – a number that does not include casual users.

And the facilities have also attracted the attention of swimming superstars Michael Phelps and Pieter van den Hoogenband. Phelps and van den Hoogenband were among more than 100 international athletes who trained at Kardinia Aquatic Centre in the lead up to the Melbourne 2007 World Swimming Championships. The Centre’s two outdoor 50-metre pools were the major drawcard for the international swim teams.

As Dean Frost adds, “the Bellarine Aquatic & Sports Centre was a long held vision of the Bellarine Peninsula community and the City worked closely with the residents to bring this project to fruition,’ adding that more than 30,000 people visited the centre within its first three months of opening.

Frost adds that “residents have really embraced the new centre; it’s constantly busy and has become a new community hub.

“The centre already has close to 1,500 members, plus more than 1,200 enrolled in the learn-to-swim program.

“These figures really highlight the need for this community facility.”

The City is now awaiting the opening of the $31 million Leisurelink gym and aquatic centre (pictured). Currently under construction in the growing south Geelong suburb of Waurn Ponds, around 70 people have been contracted to build Leisurelink, with additional jobs to be created once it opens early next year.

The state-of-the-art centre will replace the existing Leisurelink in Belmont, which is nearing the end of its operational life.

As Dean Frost explains “this is the biggest sport and recreation project ever undertaken by the City. It will be the first facility in the state to house a 50-metre pool and extensive water play equipment all under the one roof.

“It will feature theme park style waterslides, a water adventure park, learn to swim, hydro and toddlers’ pools, plus the gym will be twice the size of the current Leisurelink gym.”

Dean adds that as well as being a state-of-the-art facility it will also be environmentally-friendly.

“The replacement Leisurelink will use no more water than the old centre even though it will have more than three times the volume of water on site.”

The City of Greater Geelong has provided $28 million for the new Leisurelink and the Victorian Government has contributed $2 million plus the 50-metre pool – a legacy from the Melbourne 2007 World Swimming Championships.

Other major aquatic centre upgrades in the Geelong region include the new kids’ splash park and backwash water recycling system at Waterworld in Norlane and the mini water adventure park at Lara Pool, which will be completed in time for next summer.