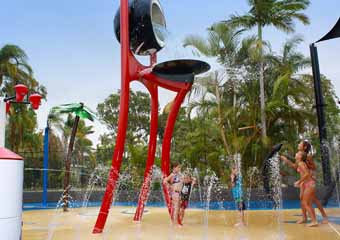 The winning design for the park, which is planned to include a six-line racer water slide, wet play area, kiosk, car parks and open grassed play areas with barbeques, was submitted by Mode Designs, which has an office in Darwin.

Unveiling the design, Deputy Chief Minister Lawrie explained that "the Palmerston Waterpark is a 2008 election commitment by the Northern Territory Government to provide fun recreation for residents of the Territory's fastest growing city.

"I am pleased to ... invite Territory businesses to lodge a tender to build this much-anticipated community facility."

Situated near the Palmerston City Centre also features an extension to an existing skate park.

Deputy Chief Minister Lawrie added that the plan has been developed in consultation with the Palmerston community through a community forum in November 2010 and the LarrakiaTraditional Owners.

"The chosen design looks fantastic, and I congratulate Mode Design on listening to the wishes of the Palmerston community and on coming up with a vision that blends the top end natural environment with state-of-the-art water fun.

"Thrill seekers can race their friends on the 14m high, six-lane super slide which has a 'ready set go system' and tells you your race place as you exit.

"Little ones will enjoy splashing around in a dedicated play area with sprays, water curtains and shallow wading pool, while older kids have their own pool with active water cannons, buckets and high intensity interactive play.

"People of all ages can relax in grassed shady barbecue and picnic areas or take a walk along the eastern creek on an interpretative environment walk."

The City of Palmerston car park currently under construction will serve as an overflow to the facility and adjoining skate park via the existing underpass.

Documentation is available from www.nt.gov.au/tenders