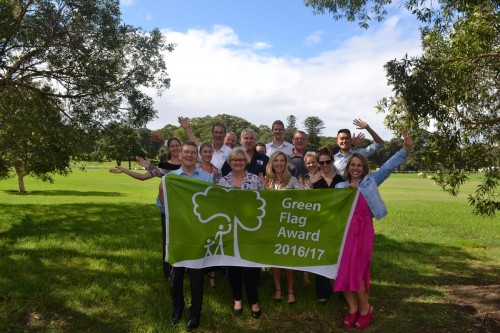 Centennial Parklands has won a fifth consecutive Green Flag Award in 2017, firmly cementing its status as one of the world’s best public parks and a leader in the realm of green space management practices.

It also makes the historic Sydney Parklands as one of six across Australia to receive the prestigious accolade in 2017.

The Green Flag Award is an international benchmark for high quality parks and green spaces with judging scores based on several criteria including sustainability, cleanliness, horticultural standards, community involvement and providing a warm welcome.

Green Flag judges found that Centennial Parklands was in excellent condition, given that the Sydney green space hosts more than 25 million visits every year.

Welcoming the recognition, Kim Ellis, Executive Director Botanic Gardens & Centennial Parklands, stated “we are absolutely delighted to receive a Green Flag Award for the fifth year. This fantastic award recognises and highlights that the community is benefitting from a green space of the very highest quality.

“With a rapidly growing urban population surrounding the Park, and so many user groups, it is becoming increasingly important to ensure the standard of our environment and facilities are maintained at an exceptional level – otherwise we run the very real risk of being loved to death. It is a credit to the Centennial Parklands team that the community continues to enjoy a truly world-class parklands.

The Green Flag Award scheme is being piloted in Australia and New Zealand by the New Zealand Recreation Association in line with Keep Britain Tidy’s scheme, which was launched in England in 1996.

Other Australian parks to receive Green Flag Awards in 2017 include: