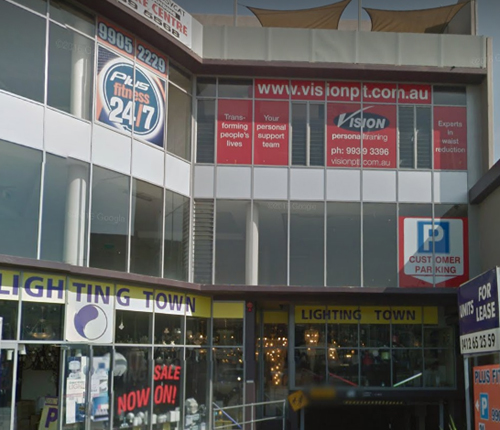 Three exercisers have been hospitalised after being stabbed by an intruder at a gym on Sydney’s Northern Beaches yesterday evening.

Police are now hunting for the "agitated and aggressive" man, described as having a full beard and aged in his mid to late 20s, who allegedly attacked the men at the Vision Personal Training studio in Brookvale before driving to Newcastle in a stolen vehicle and going on to commit two armed robberies at service stations just hours later.

According to media reports, the man entered the studio at around 8pm on last night, approached four men and a trainer, punching one before producing a knife and stabbing three of the men.

One man was stabbed in the neck is understood to have collapsed on the floor of the gym, while his two terrified and bloodied training partners ran out the door.

One stumbled to the neighbouring gym, Plus Fitness 24/7, leaving a blood trail on the ground and splatter across the front door, which automatically locks to non-members at night.

The injured men ran outside and called police, and their alleged attacker escaped in a stolen black BMW, with NSW registration plates DKK 39Q.

The stabbing victims were taken to Royal North Shore Hospital. One of the men needed emergency surgery, while the other two were in a stable condition. A NSW Police spokeswoman advised that none of their injuries are life-threatening.

The alleged attacker apparently escaped in a stolen black BMW, with NSW registration plates DKK 39Q. Members of the public who see the man or the stolen car have been advised not to approach him, but to call triple zero immediately.

Following the incident, Vision Personal Training founder Andrew Simmons released a statement advising "we are shocked and saddened by the event at Brookvale."

Simmons added “we are of course assisting Police with their investigation, and supporting our Brookvale studio in offering counselling services to trainers and clients involved in the incident.

"We have been in contact today with all those affected to offer our support after such a traumatic experience, and we wish them as fast a recovery as possible."

Anyone with further information should contact Crime Stoppers on 1800 333 000.