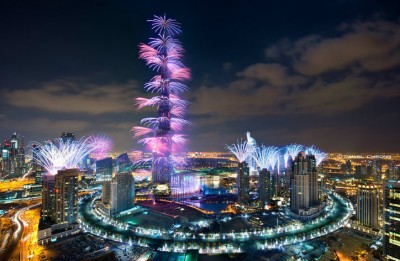 The Emirate of Dubai has welcomed in 2014 with a huge fireworks spectacle which is expected to be acknowledged as the world's largest ever fireworks show.

Attempting to break the Guinness World Record for the 'Largest Fireworks Display', a six-minute choreographed firework display lit up the city's coastline with a flying falcon made out of fireworks moving along the foreshore while the New Year's Eve countdown was completed in fireworks.

The citys landmark structures of the The Palm Jumeirah, Atlantis The Palm, Islands of The World, the Burj Al Arab and the world's tallest tower, the 828-metre high Burj Khalifa provided the backdrop for the massive and spectacular pyrotechnic display.

Prior to the event, organisers had said they wanted to create a burst of light out of fireworks to imitate a sunrise and dazzle spectators with a United Arab Emirates flag.

The six-minute extravaganza was said to include 500,000 fireworks from 400 firing locations, all synchronised by 100 computers from stations across the city.

Guinness World Record officials were on hand to measure the scale of the event and to rule on whether the world record had indeed been broken.

Around the world countries celebrated the New Year with celebrations beginning in Kiribati and Samoa at 9pm (AEDT), then New Zealand, Fiji and Tonga at 10pm.

In Japan monks rang bells at midnight, while fireworks lit up the night sky in cities from Taiwan to Shanghai to Jakarta.