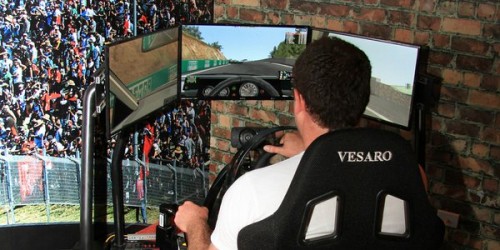 Fitted with collision detection and real dynamic mechanical vibration, V8 Supercars RedLine straps challengers into a 360 degree racing world, with motion cues to support the streaming action on extra wide screens in front of the cars. Drivers feel the roar of the motor as they pit asphalt against controls and follow in the tread marks of the legendary drivers.

Dreamworld Chief Executive Noel Dempsey explained that Dreamworld was determined to bring the simulator racing cars to Australia after team members first experienced them in the USA. The trick was to adapt the technology to Australian conditions.

Dempsey explained "nothing thunders through the body like the roar of a V8 engine and nothing appeals to Australian driving enthusiasts more than the battle at Bathurst. We've brought the technology from the US and partnered with what is at heart a deeply revered Aussie sport, V8 Supercars racing."

Dempsey added that RedLine racing is as real as it gets without spending half a million dollars building a car and taking it track side, stating "the attention to detail is incredible. You can actually feel the asphalt push against the steering wheel as you work through turns and chicanes. Drivers also compete against 21 computer generated drone cars that scream in and out of peripheral vision on the three display screens."

The V8 Supercars RedLine opens racing to a broader community, including enthusiasts not old enough or not deep pocketed enough to experience the real thing.

Explained Dreamworld Operations Manager, Rob Buchanan, "sitting in a real V8 Supercar and racing champion drivers is something that very few people get to do, but the RedLine experience gives Dreamworld guests the chance to dice with the pros for the fastest time in a virtual world.

"Drivers get a choice of three tracks. However, for the Australian audience, the ultimate target is Bathurst's Mount Panorama, regarded as one of the greatest motor sport circuits in the world.

"What we want people to do is sharpen their driving skills on the first two tracks before ascending to the grand daddy of them all, the legendary Mount Panorama. Itâs the toughest track of all, and at the end of the day, it is the holy grail of racing in this country."

Anyone can participate in the fun of V8 Supercars RedLine. Drivers must be at least 130 cm, while passengers must be 18kg and four years of age or above. Spectators can cheer from the viewing platform on the sideline and watch the driver stats on digital screens.

Each driver must participate in a short briefing video before their race. After the race, they meet in the winnerâs podium and receive a printout detailing individual lap times and finishing orders, enabling them to compare results and challenge each other to additional races.