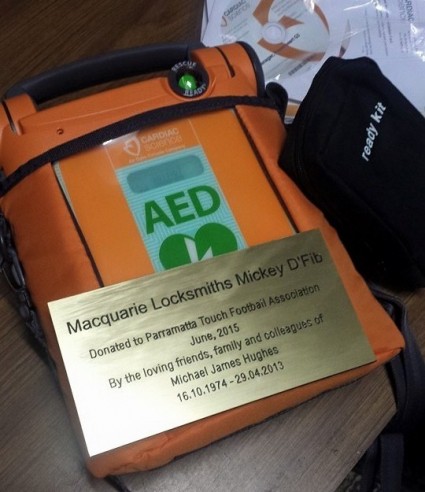 Local sports clubs and a restaurant near the Parramatta Ferry Wharf now have lifesaving defibrillators after a generous donation from local resident Julie Hughes - who turned personal tragedy into positive action.

In October last year, Mrs Hughes held a fundraiser on what would have been Michael’s 40th Birthday and started the ‘Remember Mike and Save a Life’ initiative.

The event, supported by their family, friends, local businesses and Council raised around $35,300 – enough to buy 15 defibrillators at a cost of $2,350 each.

Commenting on the donation, Parramatta Lord Mayor Scott Lloyd stated "after an incredible tragedy Mrs Hughes has made a significant contribution to the community that could potentially save lives.

"Council staff worked with Mrs Hughes to identify the most appropriate locations for the devices and they will now be available at some of the areas busiest sporting fields as well as the Parramatta ferry wharf."

The five new defibrillators in the Parramatta City Council area have been donated to the following clubs and restaurant:

Julie Hughes said the 10 other defibrillators have gone to various locations including Ryde and the Northern Beaches – all places where Michael either lived or worked. 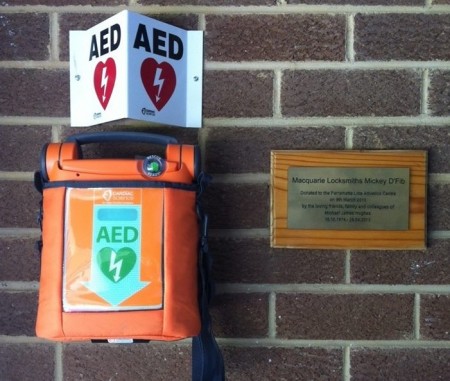 The other locations include:

She explained "we wanted a way to honour Michael and give back to the community. I joined forces with Michael’s business partners at Macquarie Locksmiths, Vince and Tracey Barbaro, and we have worked closely with Sue Buckman, director at ‘Defib For Life’, a Victorian based not-for-profit organisation to facilitate the sourcing of the machines.

“Council has helped select suitable locations and install signage, and all the new machines will come with complimentary training for the groups using those parks. I would also like to thank Ambulance NSW Inspector Kevin McSweeney for his support with signage and training.

“Early CPR and early defibrillation can save lives and I would encourage members of the community to do a first aid course so they are familiar with current practices.”

For more information visit Facebook page Remember Mike and Save a Life or Defib For Life www.defibforlife.org.au.