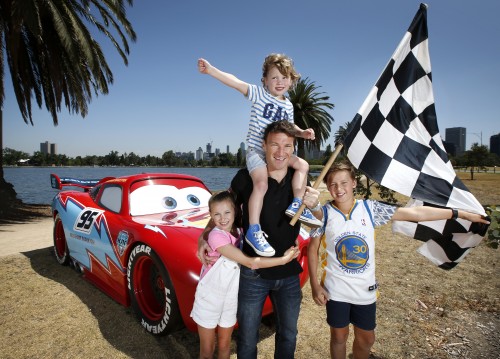 Disney will offering a line-up of off-track entertainment, with a host of other entertainment and activities for families to enjoy.

Located within the Kids Corner of the Albert Park Grand Prix Circuit, the Disney precinct will feature the Disney Pixar Cars World Grand Prix Circuit with Lightning McQueen and Mack the Transporter, plus brand new activities from Disney Channels including a Disney Junior Pirate Ship and Star Wars Jedi Training in the Disney XD area.

The area will also feature a special ‘Parents Pit Stop’ area to relax in as children make the most of the free activities.

Westacott explains “we’re absolutely thrilled to have Disney on board and look forward to a variety of fun and free activities throughout the event.

“People young and old are familiar with the Disney brand so we expect that kids, families and everyone in between will be lining up to be part of the action.”

Catherine Powell, Managing Director, The Walt Disney Company Australia and New Zealand, adds “we are delighted to join with the Australian Grand Prix Corporation to bring the magic of Disney to the opening event of the F1 season, one of the most iconic events on the Australian and global sports calendar.

“Fans of all ages will be able to immerse themselves in Disney stories and characters, plus explore the lands they know and love from Pixar classics like Cars to the world of Star Wars and beyond.”

The Disney Pixar Cars Junior GP Challenge will also take centre stage at the 2016 Formula 1® Australian Grand Prix, providing 10 lucky youngsters between the ages of three and six with a once-in-a-lifetime opportunity to race down the main straight in front of thousands of racegoers.

For those fans that are keen to catch a glimpse of their favourite Disney characters and activities ahead of the 2016 Formula 1® Australian Grand Prix event weekend, Disney will be on show at F1 World at City Square from 12th to 22nd January, and at F1 @ Federation Square from 26th to 28th February.

In another coup for families and just in time for Christmas, the Australian Grand Prix Corporation is offering ‘2 for 1’ tickets for General Admission fans until 22nd December 2015.

Race organisers will also be allowing children aged 14 years and under to attend the event for free when a General Admission adult ticket is purchased.

As a result, families who take up the ‘2 for 1’ offer and who have children aged 14 and under will be able to attend for just the single ticket price.