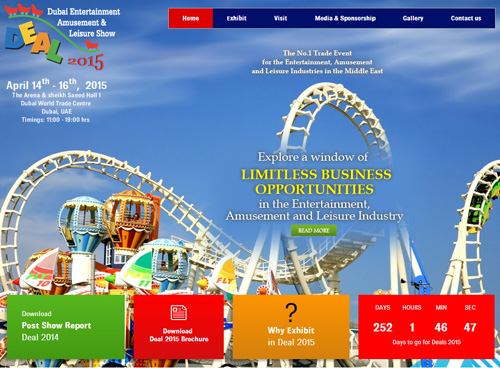 The organisers of the Dubai Entertainment, Amusement & Leisure Show (DEAL), have announced that the Middle East’s largest attractions and entertainment exhibition will be held from 14th to 16th April 2015.

IEC Chairman Abdul Rahman Falaknaz believes that the user friendly website’s data is laid out in a very creative and informative manner for its visitors, stating “the website is basically our corporate personality on the web - which is accessible to the whole world.

“We wanted to change the outlook and cater to the growing users of smart devices and reach out to the people on the move.

“Our new website ensures that our exhibitors can stay connected with DEAL on a real time basis (and) we are delighted to ... and provide them with show related information on their finger tips.

“The launch of our all new website is in line with our ongoing effort to improve communication between us and the world of leisure and amusement.”

The new DEAL 2015 website capabilities include crisp visuals, bright banners, streamlined contents, friendly features, with real times support and services. It addition to that, the website will provide the users with detailed report on the past shows, information about the upcoming show, attractive photos and videos gallery and dedicated online support among other features.

The company also announced the addition of social media features to enhance the experiences of site visitors further. This site also provides the customers with an access to the most recent news, articles, newsletters and testimonials from exhibitors.

The Middle East attractions and entertainment market has been flourishing and expanding over recent years, with DEAL representing all that is innovative and exciting in the industry.

From a coin-operated amusement and ticket redemption operations through to major theme  parks and Waterparks, DEAL is now acclaimed as one of the premium and leading shows in the world.

Last year, exhibitors at the DEAL 2014 show  signed contracts worth over AED 1 billion (US$240 million) with the exhibition growing by 25% over the previous year.

It attracted more than 300 companies from across 33 countries and along with over 7,000 trade visitors apart from 32 new exhibitors.

As Sharif explains “‘retailment’ is now in the limelight (being) an amalgamation of family entertainment centres (FECs), retail, cinemas and F&B which has been adopted in the GCC and across the Middle East.

“Malls in the region compete with each other by bring out new innovative entertainment zones constantly. It is therefore not something unexpected that the main leaders in the amusement and leisure industry all across the globe are showing keen interest in the DEAL show that is taking place in April 2015.”

“The Middle East region is all set to write a new chapter in the entertainment and leisure industry with the DEAL 2015 shaping up to become one of the largest platforms for the industry.”

For more information on DEAL 2015 go to www.dealmiddleeastshow.com