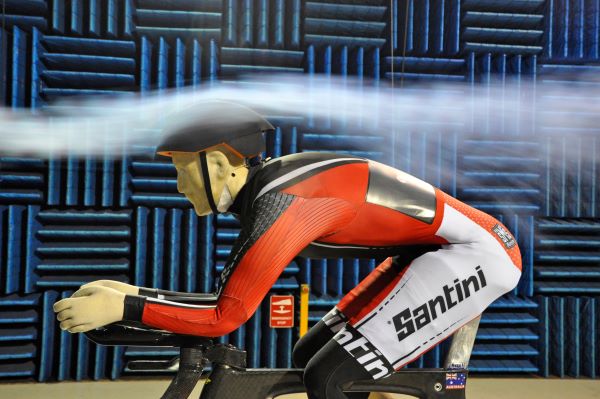 A Deakin University researcher has designed a new generation of smart bicycle helmet which can automatically adjust its ventilation to suit various race conditions.

The prototype helmet, Dynaero, is equipped with Bluetooth technology to connect to sensors and computers embedded in high performance bikes and does the thinking for the cyclists, opening or closing the air vents of their helmets in response to temperature, speed and other factors.

Deakin University School of Engineering research fellow Dr James Novak who used 3D printing to develop the helmet said it had the potential to boost performance in international competitions like the Tour de France.

Dr Novak advised: “Most helmets are static products and don’t change to suit the race conditions.

“Specialist time trial helmets are designed with almost no ventilation to minimise drag forces but, as a result, they can only be worn for short periods before the athlete risks overheating.

“In races like the Tour de France, where each stage lasts four to six hours, helmets have to strike a balance between aerodynamic performance and ventilation; they are not optimised for either extreme.

“The Dynaero is a highly responsive helmet and will close ventilation during fast down-hill descents or finish line sprints, potentially maximising the cyclist’s aerodynamic performance by 3.7%.

“When aerodynamics are less critical, such as during slow hill climbs, the vents open to increase airflow and keep the cyclist cool. In this way, both the performance and health of the cyclist are improved through intelligent design.”

Dr Novak said that regulations of the world governing body of cyclists, the Union Cycliste Internationale (UCI) currently don’t allow this type of technology but he is hoping that recent international interest in his prototype helmet can change that.

The Dynaero has impressed judges in the international wearable technology competition Reshape19 and is one of ten finalists in the Smart Product Category in this year’s event held in Barcelona this week from 29 th to 31st October. Winners will be announced on 31st October.

The helmet will also become part of a travelling exhibition for a year, with three exhibitions already booked in Barcelona and Rome up until April 2020.

Dr Novak added that the Dynaero has been tested in a wind tunnel alongside commercial helmets and earlier 3D printed prototypes: “The current prototype has been made using selective laser sintered nylon, and is custom designed to fit the wearer with their name embedded as a detail, optimising safety and comfort for cyclists.

“It features an Arduino Uno, Bluetooth sensor, micro servo and a custom-built mobile phone application that uses a built-in accelerometer to determine speed, controlling the opening of the vents. Future versions of the helmet will also be connected to a range of cycling and wearable sensors.”