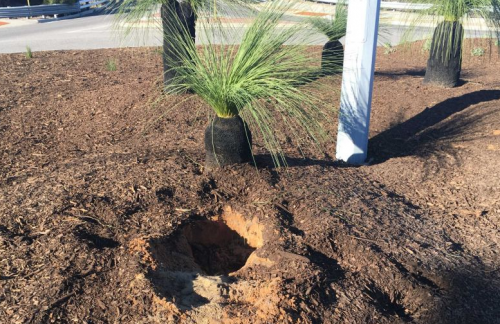 The City of Greater Geraldton has taken the unusual step of microchipping expensive plants, after thieves recently made off with two Grass Trees worth $300 each.

As reported in a recent Institute of Public Works Engineering Australasia (IPWEA) Blog, City of Greater Geraldton acting Chief Executive Ross McKim said the theft from one of the city’s roundabouts was disappointing.

As a result, future plantings of the attractive flora will be micro chipped for the purpose of tracking and identification.

McKim explained "stealing is absolutely unacceptable behaviour (and) it is very disappointing to see our efforts to beautify the City’s roundabouts with Grass Trees and other native plantings being undone, especially since we’ve received such positive feedback from the community on these works.

“Since the theft, the City has GPS microchipped all Grass Trees so they can be monitored and tracked.”

The microchips are the same type commonly used to track down lost pets, and cost a couple of dollars each.

McKim added "it’s unfortunate the City has to take these measures to combat the theft of these trees but if it enables us to recover stolen community property it is worth the effort."

Acting City Director of Infrastructure Services Chris Lee told the ABC he believed it was the first time the tactic had been employed by a local council in the state.

Lee advised "I'm not aware of this being done elsewhere in the state personally.

"It's a fairly simple process and it should be a strong deterrent to stop people doing this in the future."

At the end of 2016 it was reported that plant thefts were costing Shire of Broome ratepayers thousands of dollars a year.