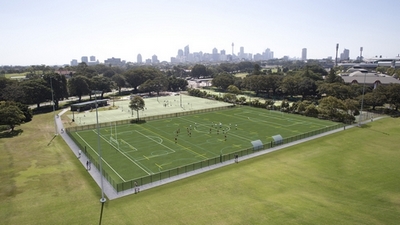 Plans for a new internationally-certified synthetic sports field in Moore Park have been unveiled, providing a much needed all-weather community sports facility minutes from Sydney CBD.

“However, with ongoing challenges including; increases in sports participation, a growing local population, and demand for space by more and more sports resulting in our existing sports field being at capacity. On top of this, we calculate that around 3,000 hours of sport usage is lost annually due to wet weather and up to 8 weeks lost to turf maintenance and regeneration.”

After more than two years of research, consultation with various sports hirers and with the input of leading experts on synthetic surfaces, Centennial Parklands successfully applied for funding from the NSW Government to construct the first synthetic sports field in the Parklands.

As a result, Sanderson adds “the synthetic field will be the closest to the Sydney CBD, and have an enormous catchment area.

“Already more than 90% of clubs, sports groups and schools that we surveyed have expressed an interest in the project.

“At its peak, we believe more the field can cater for more than 40,000 patrons a year ... a big win for the local community sport.”

Having faced the challenge of finding an appropriate location for the field in the Parklands, the Robertson Road Fields in Moore Park were eventually chosen as the site.

The synthetic field will be certified to NRL, AFL, ARU and FIFA standards, and it is expected that it will become operational in December 2015.

Sanderson concluded “the project deadline is one that we are keen to meet.

“December 2015 represents the start of the 150th anniversary of Moore Park as a dedicated public park for the community, and this project is one project that will help recognise this historic anniversary.”