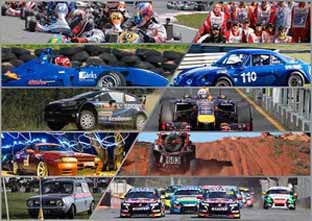 The Confederation of Australian Motor Sport (CAMS) believes that the sport deserves more support from Governments and the corporate sector as a result of an Ernst & Young report that shows motor sport contributes $2.7 billion to the Australian economy each year.

The report, commissioned by CAMS, found that motor racing accounted for 16,181 direct jobs with more than 150,000 people regularly participating in motor racing, mostly concentrated in circuit racing, including go-karting, and speedway competitions.

It also revealed that, on average, motor sport competitors spend between $12,000 and $15,000 a year on motor sport activities and $60,000 on motor sport vehicle purchases and initial modifications.

Papadopoulos stated "we wanted to know what the total impact of the industry is so we can better advocate on behalf of clubs, venues, members, and the industry.

"CAMS is the administrator, developer, promoter and regulator of four wheeled motor sport in Australia and we felt it was time to finally confirm our long held belief about just how much motor sport matters financially.”

Confident of motor sport ass a significant generator of economic activity, of stimulus to the economy and is an employer and creator of jobs, the report substantiates that view.

“We knew there was a big industry behind motor sport, we just couldn't put a figure on it.

“But now we can and the results are outstanding.

“This report will provide a compelling case about the significance of motor sport to this country, both as a sport and as an industry.”

CAMS now intends to share the findings of the report with Federal and State Governments with copies dispatched to politicians and decision makers to ensure that they are now aware of the impact of motor sport in Australia, an impact which until now, has largely gone unnoticed.

Papadopoulos hopes that “this report will confirm, not only to government, but the wider community, that motor sport is a great sport and a major contributor to the Australian economy.”

FIA President Jean Todt welcomed the report’s finding, suggesting that Governments needed to be more aware of the major impact of motor sport.

Todt stated “in order to get from the grass roots to access the highest categories of motor sport we need to have support from everywhere and I can claim we have already had major support from the Australian Government.

“Motor sport is global and it generates a lot of expenditure. I am sure the report will make a strong contribution by increasing awareness of this.”

Click here to view a summary of the CAMS Ernst & Young report into the economic impact of motor sport in Australia.