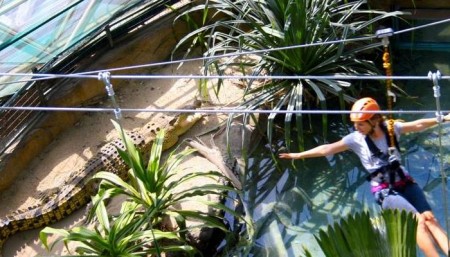 Tropical North Queensland's most exciting new attraction, the Cairns ZOOm, has opened to the public.

Situated in the Cairns Wildlife Dome on the roof of the Pullman Reef Hotel Casino, the new attraction consist of 65 elements of crossings and ziplines, including one that takes participants directly over Goliath, a four metre crocodile.

Cairns Wildlife Dome General Manager Michael Woodward said the Cairns ZOOm appeals across all markets and ages with varying levels of difficulty and adventure, stating "a soft adventure component called the Dome-Climb will allow participants to walk along an external walkway around the perimeter of the Dome taking in breathtaking views of Cairns City, surrounding mountains, Coral Sea and Trinity Inlet.

"The Hi-ZOOm Course consists of complex crossings and ziplines and will appeal to the more adventurous, as will the PowerJump, where participants jump off a 13 metre high tower attached by rope, with a fan device ensuring a gentle and smooth landing.

"The Mid-ZOOm Course is at an easier level of difficulty, is suitable for beginners, young people and as an introduction for the Hi-ZOOm. There are 27 different elements to explore including a spider's web, seesaw, chairs and a snakes and ladders climbing wall."

The entire course utilises SafeRoller, a continuous belay system, with participants connected via a harness to a safety cable system that they are unable to disconnect themselves whilst traversing through the elements.

Cairns ZOOm has already had its first celebrity ZOOmer, with Channel 7 Sunrise weatherman Grant Denyer making live crosses to read the weather while completing parts of the course on the day before this month's total solar eclipse.

Cairns ZOOm is an exhilarating Ropes Adventure Course consisting of ziplines, crossings and walkways in a wildlife immersion exhibit, allowing visitors to appreciate and be educated about our native fauna.

For more information go to http://cairnszoom.com.au/