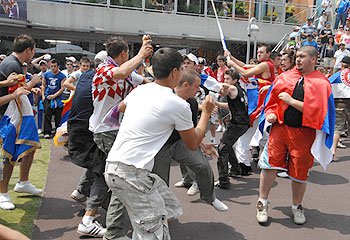 Victorian Premier John Brumby has slammed troublemakers at this week's Australian Open as "embarrassing to Australia."

Troublemakers have been ejected on consecutive days from Melbourne Park for disruptive behavior. The trouble began on Monday during a match between a Croatian and Czech player, and led to 11 people being evicted and banned from the event.

On Tuesday, a group of Croatian supporters lit flares and threatened other spectators outside Melbourne Park. Police Superintendent Jock Menzel explained "we had a number of people attend the tennis and there was an incident with a flare (and) these people were prevented admission to the ground."

In relation to Monday's incidents, Superintendent Menzel added, "11 people were disruptive ... they were standing on seats, standing on chairs and they were causing problems for the other spectators who were there to watch the game."

Superintendent Menzel denied there had been a security lapse, describing the fans' methods of bringing banned items into the tennis precinct as "innovative" and adding "security is as tight as it can be and we'll continue to be vigilant." 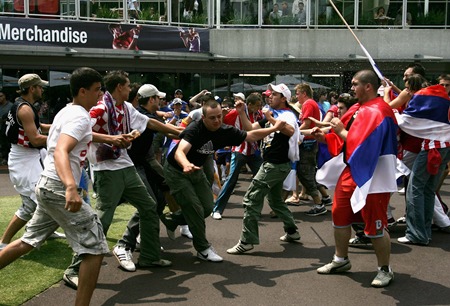 Jones said security needed to be improved to protect the event, which attracted more than 600,000 spectators last year, stating "just as the value of our international education market is being eaten away by unchecked savagery in the form of street violence, the value of major events such as the Australian Open could be eroded by racially-based hooliganism."

Jones said tennis players should be enlisted before the tournament to inform fans that "idiotic behaviour passed off as barracking is neither needed nor wanted."

The Australian Open has been marred on a number of occasions in recent years when ethnic tensions between fans of Croatian, Serbian and Bosnian origin has erupted into violent confrontations.

On the opening day of the 2007 tournament Serbian and Croatian fans, draped in their national colours, fought openly.

Last year, a brawl broke out in the Garden Square area of Melbourne Park involving Serbian and Bosnian supporters who hurled plastic chairs at each other.

Superintendent Cooke said the Melbourne Park's CCTV systems had been extended with police monitoring around the clock during the two-week event.