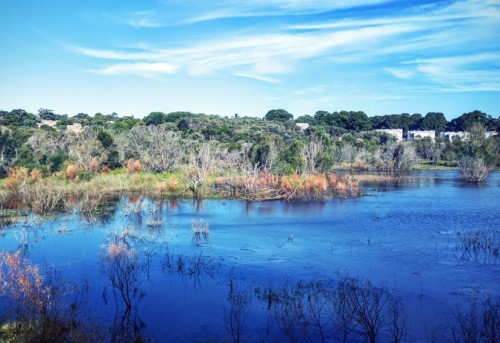 The Randwick Environmental Park, an area of former Army land approved for restoration as a park back in 2003, has finally opened.

Randwick Mayor Murray Matson this week entered the park following agreement with Department of Defence legal representatives where contracts for the transfer of the land to the Council were signed and witnessed. As agreed by both parties, the Department of Defence handed over $2 million to the council for the ongoing maintenance of the environment park over the next 19 years.

A jubilant Mayor Matson told local newspaper The Southern Courier "we've been fighting for the wetlands since 1993, itâs been a long wait."

The 13.1 hectare environmental park at the eastern end of the former Department of Defence site adjoins a proposed neighbourhood park within adjacent residential development precinct, providing a contiguous open space area of 14.5 hectares. Public access is by defined footpaths and cycleways while viewing platforms provide the opportunity for visitors to experience the wetland and flora. The area of the former cricket oval will be used for passive recreational uses and will include barbeques and picnic shelters. The cleared southern end fringes of the park will also be available for passive recreation.

For four years Southern Randwick residents have faced a steel fence separating them from the promised parkland.

Mayor Matson said the Randwick Environment Park was home to rare and endangered vegetation, the Eastern Suburbs Banksia, and an ephemeral wetland, adding "it's important the council preserve our local native fauna and flora for the benefit of future generations and I am thrilled that after many years of negotiations with Defence, Randwick Environment Park is now open for the community's enjoyment.

"Many local residents have been anxiously awaiting the dedication of the parklands to the council and the removal of the fence surrounding the grounds, so they can access the park and appreciate the native wildlife and wetlands."