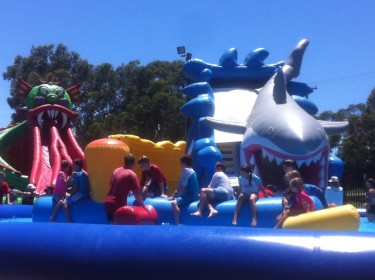 With the success of the Waterworld Central concept now seeing owner OFA Showstar able to operate in three locations at any single time, the portable waterpark is currently a feature in Newcastle, at Bateau Bay on the NSW Central Coast and at Blacktown International Sportspark.

Commenting on the Blacktown International Sportspark operation, Manager Daniel Osbourne told the St Marys/Mt Druitt Star local newspaper that unlike the Wet'n'Wild Sydney waterpark was mainly for under-16s and was smaller in scale.

Osbourne stated "it's a different experience for families.

"We've had a really good response so far ... I've spoken to parents as they were leaving (and) they love it."

Developed as a major playing and training venue for athletics, baseball and softball for the 2000 Sydney Olympic Games, Blacktown International Sportspark, formerly Blacktown Olympic Park, has continued to grow and develop, welcoming AFL, Cricket and the International Goalkeepers Academy to the 'family' over the past 12 years.

Owned by Blacktown City Council and managed by Blacktown Venue Management Ltd, the venue is utilised by a range of elite sporting groups including the Sydney Blue Sox Australian Baseball League team and the Western Sydney Wanderers FC who are based at the venue.

The Sportspark hosts 3,700 events which attract half a million visitors each year.