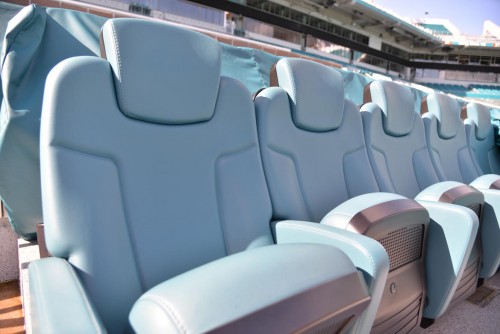 Spectators at the Perth Stadium in Burswood will enjoy the comfort of seats just one centimetre narrower than Qantas' domestic business class seats.

Giving a recent update on plans for the $700 million Stadium, Western Australian Premier Colin Barnett announced that facilities at the venue would help create a 'fan first'experience, with larger seats and more leg room than at Patersons Stadium.

Premier Barnett explained "I can confirm the seats at the new stadium will be much bigger and more comfortable than the seats at Patersons Stadium, with enough spacing between rows to allow patrons to pass through without other patrons having to stand up.

"The issues around seat size and lack of passing room at Patersons Stadium are something I am very much aware of, so for Perth's new stadium, both these have been set to be bigger than Etihad Stadium. In fact the seats are less than a centimetre narrower than the traditional Qantas domestic business class seats."

Melbourne's Etihad Stadium is acknowledged as one of Australia's best sporting arenas for spectator comfort.

The Project Team and architectural consultants Populous have worked closely with representatives of all the major spectator sports to ensure the seating capacity and design of the bowl meets the requirements of their competitors and fans.

Throughout this process there has been an appreciation that the news stadium will be competing with home sport viewing, and for the new venue to be an attractive place to attend matches rather than watch them on television.

Here Premier Barnett explained "catering for the fans first is the philosophy and approach underpinning everything we are doing in terms of the stadium's design and functionality.

"We want to bring Perth fans closer to the action than they have ever been and create an atmosphere that will be second to none in the country.

"To achieve this we have chosen to design the seating bowl in a 'colosseum' style, similar to the highly successful redevelopment of the Melbourne Cricket Ground."

Sports users, including anchor tenant the AFL, have advised that 60,000 seats should be the optimum starting capacity to best meet their commercial requirements.

As previously reported, the seating bowl will therefore be designed so that additional seating can be built at a future date on top of the initial colosseum style 60,000 seating bowl.

Sightlines at the new stadium will ensure fans not only have comfortable seats, but the best view as well, Premier Barnett adding "this also means fans won't have to stand up to watch the action close to the boundary."

Western Australian Sport and Recreation Minister Terry Waldron said putting fans first meant ensuring there was a good view from all seats, that there were enough toilets and places for families to relax before and after the game as well as access to quality food choices.

Minister Waldron explained "watching a game at Perth's new stadium will be a far better experience than at Patersons Stadium, with a good view from every seat and a range of offerings available to everyone."

Minster Waldron also hinted at hospitality at the new stadium would be of the highest standard, adding "there will be more than the traditional corporate box on offer, allowing the people of Western Australia as much flexibility as possible for their match day experience."

Architects Populous are set to begin the concept design phase for the venue later this year.