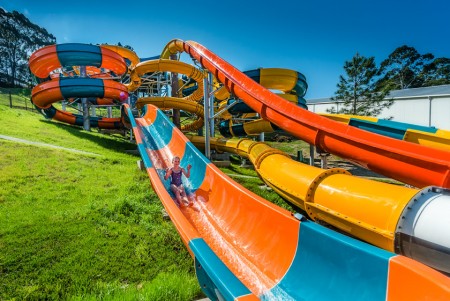 Set for its official launch on the weekend of 24th and 25th October, the $1.6 million development features four all-new waterslide and raft tube rides and an aqua play area for the youngsters.

Marking another exciting chapter in the 50-year history of the landmark attraction, centred on its iconic ‘Big Thing’, the slides include a one and two person raft rife, an open body slide, a black hole aquatube body slide and a 45 degrees speed slide where riders reach speeds of up to 60 kilometres p/h.

Welcoming the new attraction, Big Banana General Manager Michael Lockman stated “the Coffs Coast is now the proud owner of the biggest water park between Sydney and the Gold Coast (and) we are particularly proud to have focussed on using local contractors for almost everything.”

Swimplex Aquatics undertook the project, having first been approached about the project by the owners of the Big Banana at the turn of the decade.. 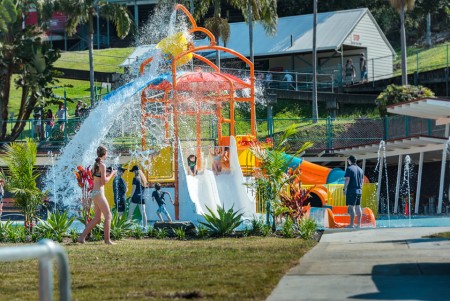 With the leading aquatic industry supplier having the benefit of also being based in Coffs Harbour they developed and presented 11 designs for project, using waterslides from Polin Waterparks to take advantage of the sloping sight.

Swimplex Aquatics Project Manager Daniel Leaver explained “the positioning of the slides on the hill changed several times during the design process.

“Michael Lockman ... had an uncompromising vision and we were able to make that happen.”

Due to the uniqueness of the site, the project presented some complexities but construction took just five months.

Leaver adds “we won’t see a project like this one again. The elevated work platforms, difficult access and working on a hill meant we had to be innovative, work on the run and devise solutions on the site.

Coinciding with its expansion, the ‘Big Thing’ has also rebranded itself as the Big Banana Fun Park and Big Banana Water Park. 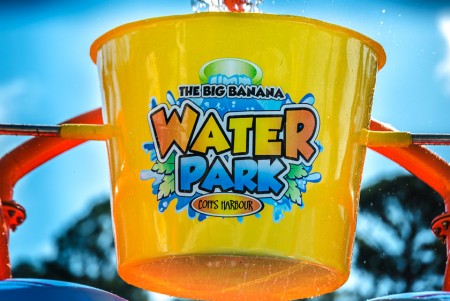 Access to the Big Banana Water Park is available in two-hour blocks, with a 10 entry ticket for two hour weekend sessions costing $99.

The Big Banana is also partnering with local tourism operators to boost visits to the Coffs Coast region.

Lockman adds “more than 30 accommodation providers have partnered with our fun park to provide stay and play packages that will drive regional tourism like never before.”