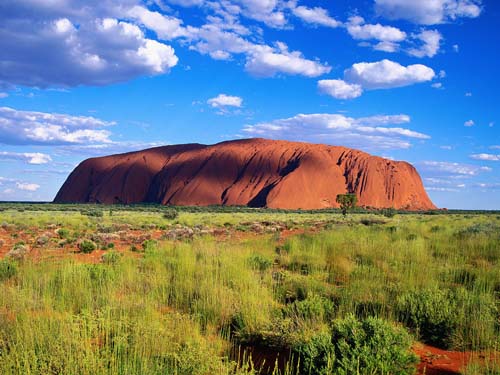 A proposal to reduce the cultural and environmental impact of tourism would see visitors would get a bird's eye view of Uluru from a tethered helium balloon.

The Skyflyer balloon proposal, submitted by the management of Ayers Rock Resort, would, according to a project application to the Federal Government, give "visitors a unique viewing platform of Uluru and Kata Tjuta (The Olgas) as a safe alternative experience to climbing Uluru."

The project is being proposed by Astrosphere in partnership with Voyages Indigenous Tourism, Uluru's principal tourism operator.

Astrosphere intends to fly the balloon eight times a day for 30-minute flights, it says in a submission made to the Federal Government under environmental protection laws.

The proposal adds "passengers will board the gondola and ascend to around 150 metres above ground (from where) they will enjoy spectacular 360 degree panoramic views."

The launch site is about 10 kilometres from Uluru, outside the national park, on freehold property owned by the Indigenous Land Corporation, a federal statutory authority.

The proposal says offering a balloon flight as an alternative to climbing the rock would "enhance cultural awareness and respect indigenous law and culture to not climb Uluru."

It adds "the proposed action will help facilitate the management plan's objective in moving towards closure of the climb."

Under the Environment Protection and Biodiversity Conservation Act, the Federal Government will consider what issues the project will need to satisfy.