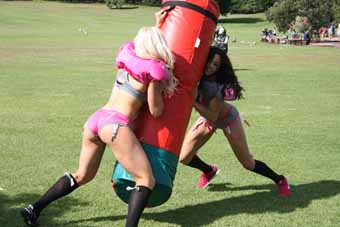 Apparent plans for an Australian version of the USA's Lingerie Football (gridiron) League have been slammed by the Australian Womensport and Recreation Association (AWRA).

AWRA issued a statement expressings its "disappointment" that "a denigrating and sexist form of entertainment, in the shape of a Lingerie Football League (LFL), has found its way to Australia's shores."

While a proposal by husband and wide sports promoters Todd and Tala Schultz for an Queensland-based Australian LFL gained wide exposure in Queensland newspapers, and was subsequently featured on Channel 7's Sunrise program, few details of the proposed competition have emerged.

However, the Schultzs have certainly enjoyed the limelight, Todd Schutlz telling local newspapers, apparently in all seriousness, "this is getting more publicity than the Rugby World Cup."

Todd Schultz, is reported as stating that the LFL will boost his charity, Xsport, an organisation that apparently provides opportunities to young sporting prodigies. (Xsport is not related to the US-based Xsport fitness chain).

Explaining that Tala Schultz is focussing on getting the teams together for a first game in late October in Ipswich, Todd Schultz added that Tala "is really trying to push girdiron in Australia."

Whether an Australian LFL eventuates, AWRA is unimpressed with the proposal, President Janice Crosswhite stating "this League is sexist and demeaning to all women. In a society where women have been seeking and starting to secure equal rights and respect on and off the sporting field, this development undoes so much of the hard work being done by many sporting organisations across the country."

League founder Mitchell Mortaza has admitted that the league is marketed toward "beer-drinking college students aged 21 and up."

Crosswhite adds "the whole idea of (this) being considered a sport is ridiculous.

"In a country such as Australia where we have been working so hard to have female athletes respected for their performance, rather than their appearance or shape of the their bodies, it is a shame that we have taken a huge step backwards through the establishment of this League.

"This lingerie league has little to offer the knowledgeable sport participant or spectator, and we hope that the league fails."