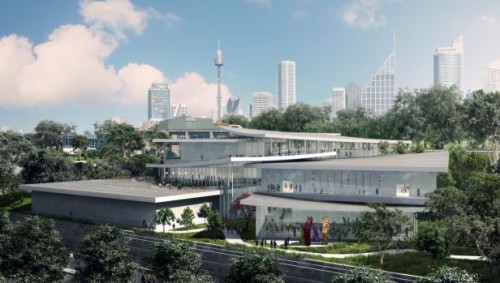 The Art Gallery of NSW's ambitious Sydney Modern expansion is being given the go ahead by the NSW Government with a $244 million funding package to be included in its upcoming budget.

The plan, which will see the gallery double its floor space, is also being backed by the Gallery raising $100 million from private donors – of which $70 million has already been pledged.

First revealed in 2013, the Sydney Modern plans extend the existing, historic gallery building to the north east through a series of eight low lying pavilions designed by the Japanese architects Kazuyo Sejima and Ryue Nishizawa of SANAA.

The extension will sit on top of two enormous and long decommissioned oil tanks, built in 1942.

This vast underground space - with seven-metre high ceilings and spanning 4,500 metre²  - will be incorporated into the extension, double exhibition space and increasing the Gallery’s chances of hosting large travelling exhibitions that it has lost to other galleries for lack of space.

Constructed during the Second World War, the ‘oil tank gallery’ will be used for performances and exhibitions, with an industrial look and feel similar to the Tate Modern. 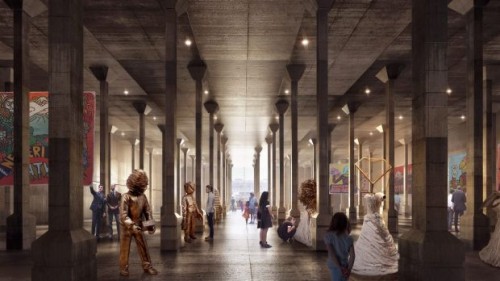 The NSW Government’s $244 million funding will be delivered over four years, coming from the $600 million culture and arts fund created from the proceeds of the privatisation of previously State-owned electricity infrastructure.

Commenting on the development, NSW Treasurer Dominic Perrottet told Fairfax Media it was "an exciting project for Sydney and for tourism to our great state."

"The Sydney Modern Project will turn our 19th Century Gallery into a global museum of the future," Sydney Business Chamber Executive Director Patricia Forsythe agreed, saying it was "great news for Sydney", adding “for too long the city has missed out on many exhibitions to Melbourne and Brisbane because we lacked adequate exhibition space.”

Based on modelling by the NSW Department of Premier and Cabinet, Sydney Modern is anticipated to pour more than $1 billion into the economy over 25 years, create 240 full-time jobs and close to double the "visitation rate" from just over one million people a year to two million.

This includes doubling the visits of school children annually to 200,000.

The project has been enthusiastically promoted by Gallery Director Michael Brand as a transformation of the gallery to a 21st century art museum. 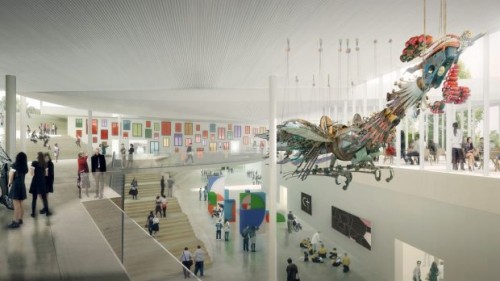 Also in the budget will be $100 million for a new Regional Cultural Fund to support construction or upgrade of galleries, theatres, libraries, museums and halls as well as "repurposing" existing infrastructure for arts, screen, culture or heritage use.

Images: Artist's impressions of the Sydney Modern project, the exterior (top), the planned ‘oil tank gallery’ (middle) and a gallery interior (below) Courtesy: Art Gallery of NSW and SANAA for Sydney Modern expansion.

22nd March 2013 - ART GALLERY OF NSW’S EXPANSION TO SUFFER FROM LACK OF FUNDS?