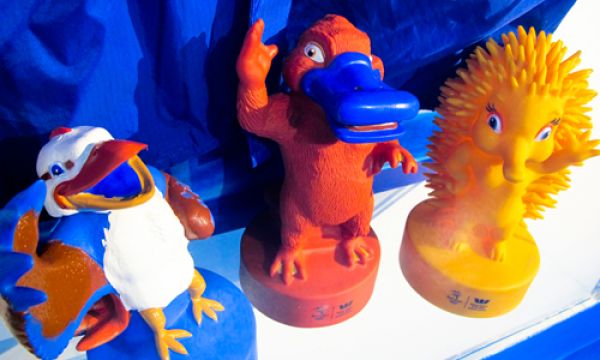 A new exhibition, honouring some of Australia's greatest sporting achievements in swimming, diving, water polo and synchronised swimming throughout the 19 year history of the Sydney Olympic Park Aquatic Centre, has opened.

Legends honoured in the exhibition include members of the 2000 Olympic team including Susie O'Neill, Ian Thorpe and Geoff Huegill as well as a host of newer stars including Melissa Wu and James Magnussen.

The exhibition includes swimming costumes and other memorabilia from athletes at the Sydney 2000 Olympic and Paralympic Games, swimming legends including Murray Rose, bottles of 'World Record' water taken from the competition pool after the first world record broken at the pool by Ian Thorpe in 1999 and again at the 2000 Olympic Games and imagery taken throughout the Aquatic Centre's near two-decade long history.

The exhibition has brought together memorabilia, some of which has never been seen before, together with video and stills images, to highlight the outstanding athletes who have shone in the Sydney Olympic Park Aquatic Centre spotlight.

Opening the exhibition this week, NSW Minister for Sport and Recreation Gabrielle Upton, explained "the collection of images, video, memorabilia and records that makes up the exhibition is a tribute to some extraordinary athletes, both able bodied and paralympians, who have embodied our hopes and aspirations in local, national and international competitions.

"Completed in 1994 as part of the bid for the Sydney 2000 Olympic and Paralympic Games, the Aquatic Centre has always had a reputation as a 'fast pool' with records tumbling throughout the Centre's history.

"This wonderful exhibition is a continuing reminder of the exploits of our past and current champions and I hope it will inspire future generations of Australian sporting champions."

The 'Dive into History' exhibition can be seen at the Sydney Olympic Park Aquatic Centre.

For more information go to www.aquaticcentre.com.au/