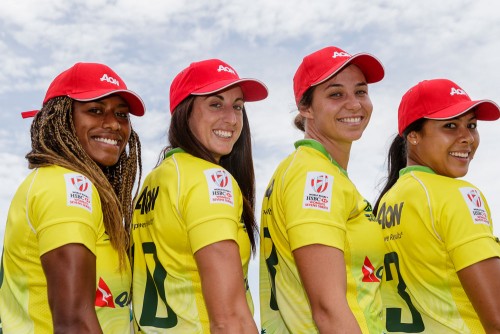 Global insurer and  risk management brokerage Aon has been announced as a shirt sponsor for the Australian women’s rugby sevens team and as naming rights sponsor for a new eight-team, national university sevens competition.

The four-year deal, worth more than $1 million, will start from today at the inaugural Women's Sydney Sevens in Sydney – part of the HSBC World Rugby Sevens competition.

The naming rights for the university sevens competition, set to commence in August, will back a competition that will cmbine Australia’s contracted professionals, up-and-coming talent and students in a new domestic sevens pathway.

Announcing the new money for the increasingly popular women’s sevens game, Australian Rugby Union (ARU) Chief Executive Bill Pulver welcomed the opportunity for women to to be paid more but questioned the pay gap between the men’s and women’s sevens squads.

Pulver suggested that the Australia’s women’s sevens team, who won Gold at the Rio Olympics, were underpaid but hoped that the new sponsorship dollars will be a start in increasing pay-packets.

Pulver stated “I think it is fair to say the girls behind me contribute far more to Australian rugby than we pay them - lets get that on the cards already.

“The commercial value they bring to the game is priceless and I think they know Australian rugby is extremely grateful for that.”

Pulver said the average income for the Australian women’s squad was $87,000 while the men’s squad pocketed an average of $92,000.

He added “so we are not quite there (between men and women) and that clearly does not compare to what is being paid at the elite level in the Men’s XV side,” Pulver said.

“I think they are unquestionably the best paid elite female athletes in the country. Are they worth more than we pay them? Yes they are.

“That’s a challenge for the game but the great thing about partnerships like this one we have with Aon is that we will have the capacity to reward them in a way they deserve to be rewarded.”

However, that money doesn’t all come from the ARU. The average ARU salary ranges from $20,000-$50,000 but with sevens being an Olympic sport, players are also eligible for government funding (DAS) and have the potential to earn another $20,000 a year in medal incentive payments.

Australia’s female cricket stars can earn up to $85,000 from Cricket Australia while and marquee AFL Women’s stars will this year earn $27,000 for their eight-week season.

Pulver said the explosion of professional womens sport in Australia was a positive thing, and said growing rugby in the female market was a key component of growing the game in Australia overall.

He concluded “it is a wonderful thing that women’s sport is finally getting the profile that it deserves and we sports administrators have a keen understanding of the strategic importance of it.

“It is the central component of growth in participation and that delivers long-term revenue growth.”

Women's rugby sevens player of the year Charlotte Caslick added: "It's massive to have such a big organisation to come on board with rugby, it's very exciting."

The ARU is still without a major sponsor for the Super Rugby season, which gets underway on 23rd February when the Melbourne Rebels take on the Auckland Blues.