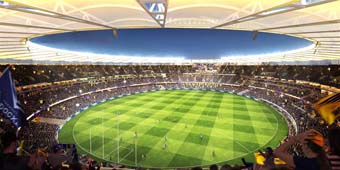 Stadium Australia Operations, the current operator of Sydney's ANZ Stadium, has been named as the "preferred respondent" to manage the new Perth Stadium.

Set to open in early 2018, the contract to manage the new 60,000 seat stadium had been contested by AEG Ogden, Nationwide Venue Management, Perth Stadium Management and Stadium Australia Operations.

In an announcement today (8th February) from the Western Australian Government, it was stated that "Stadium Australia Operations (is) to become operator of the Perth Stadium, following a three-month evaluation period and subsequent approval by State Cabinet."

Premier Barnett stated "the 60,000 seat Perth Stadium will be a world-class venue and it is fitting that a world-class operator is appointed.”

The Premier thanked all four short-listed respondents for their detailed submissions, before commenting on the strength of the winning proposal, adding "Stadium Australia Operations currently operates Stadium Australia - ANZ Stadium - in Sydney, which was built for the 2000 Olympic Games.

“The 83,500 seat venue has already attracted more than 23.5 million fans to a variety of events, including AFL, rugby union and English Premier League games, plus acts such as AC/DC, the Foo Fighters and Taylor Swift.

"The State looks forward to working with Stadium Australia Operations in the coming weeks to finalise matters ahead of signing the contract."

The operator will be responsible for the day-to-day management of the stadium and sports precinct, including catering, securing event content, event management and ticketing. 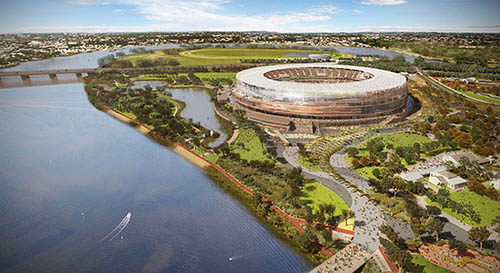 Local media describe the decision as “a shock” for the Western Australian Football.

Western Australian Sport and Recreation Minister Mia Davies said AEG Ogden was also approved as reserve respondent, in the event that negotiations with Stadium Australia Operations are not concluded.

Minister Davies stated “this decision is the result of 12 months of work since the Government first called for Expressions of Interest.

"A detailed brief was prepared which was responded to by the shortlisted applicants over almost three months, culminating in a three-month review and evaluation by a panel of senior Government officials – supported by a range of independent technical advisors.

"Ultimately the team determined that Stadium Australia Operations' bid represented the best value for money. A key feature of the bid was the depth and breadth of proposed events to be held at Perth Stadium and the strategies to secure them."

Stadium Australia Group Managing Director Daryl Kerry said his company looked forward to working with the Western Australian Government and VenuesWest to finalise matters ahead of signing the contract.

Kerry explained “Stadium Australia Group is delighted to have been selected as the preferred proponent to operate the magnificent Perth Stadium and Sports Precinct.

“It’s a further evolution of our business, which includes operating Sydney’s Olympic stadium, ANZ Stadium, and providing catering services for ANZ Stadium and a host of other venues.

“The Perth Stadium and Sports Precinct has been built with a fans-first approach to design and technology and will be one of the truly great venues of the world when it opens for business in 2018.”