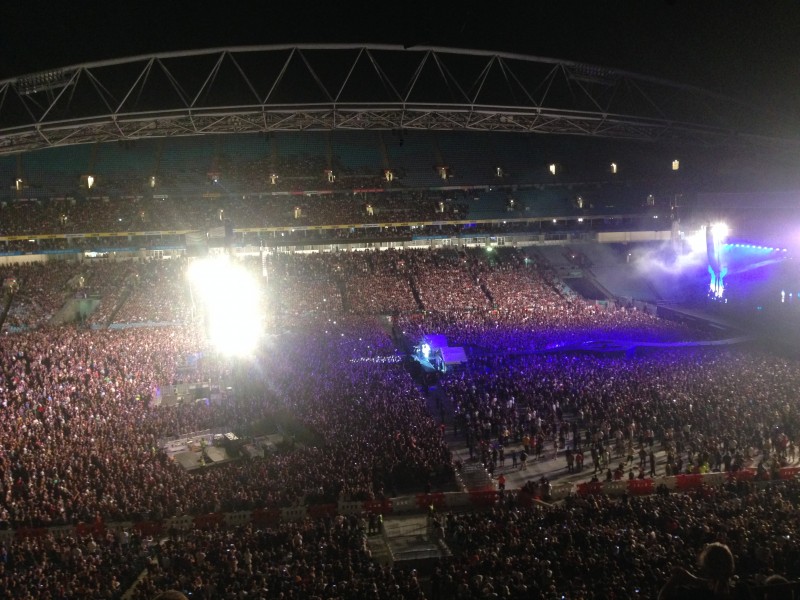 After a whirlwind 220 days of sport and entertainment, ANZ Stadium has topped one million fans for 2015 and is on track to post its highest annual attendance for events since the 2000 Sydney Olympic Games.

The 73,824 fans who passed through the gates to witness an unforgettable Bledisloe Cup Test on Saturday night took the aggregate 2015 attendance for events at ANZ Stadium to 1,172,812.

This was the seventh event to top 50,000 spectators this year, following the hugely successful  AFC Asian Cup in January and a monster week of major events in late May-early June that featured State of Origin I (80,122) and visits by English Premier League clubs Tottenham Hotspur (71,549) and Chelsea (83,598).

As Sydney prepares to celebrate 15 years since the 2000 Olympics this September, the total attendance for events at the city’s Olympic stadium since it was opened in 1999 in the lead-up to the Games is now 23,016,911.

(*The attendance figures do not include visits to the Stadium for more than 160 corporate and private events each year).

The highest annual event attendance at ANZ Stadium since 2000 was the 1.634 million that was posted in 2013 during a year that featured a British & Irish Lions Rugby Test and a visit by English Premier League giants Manchester United.

Commenting on the spectator levels, ANZ Stadium General Manager of Event & Business Development Greg Sleigh stated "our projections for 2015 have the Stadium event attendance eclipsing that figure and going above 1.65 million fans.

“We are enjoying a record-breaking year featuring great sporting events across the sporting codes and we have a very strong spring schedule coming up, with more than 250,000 new patrons expected at the Stadium to see a line-up of events that includes concerts featuring rock legends AC/DC and pop queen Taylor Swift in November.”

The blockbuster crowds at ANZ Stadium in 2015 have included:

The NSW Government’s tourism and major events agency Destination NSW estimated the back-to-back English Premier League club visits to be worth more than $16 million to the NSW economy.

Major scheduled events still to come in 2015 at ANZ Stadium include:

Each of these events are on track to draw crowds in excess of 50,000 spectators.

The Sydney Olympic Park precinct welcomed more than 105,000 visitors on Saturday 8th August on a day that featured the Bledisloe Cup rugby Test, Day 2 of the Netball World Cup at Allphones Arena and Netball Central, and the Good Food & Wine Festival at Sydney Showgrounds.

The NWC clash between the Aussie Diamonds and NZ Silver Ferns at Allphones Arena attracted a netball world-record attendance of 16,233.

About 76% of all visitors to Sydney Olympic Park on Super Saturday used public transport.

Sports and entertainment fans to major events at ANZ Stadium regularly benefit from integrated train transport in all tickets and are able to travel to the front door of ANZ Stadium at no additional cost.