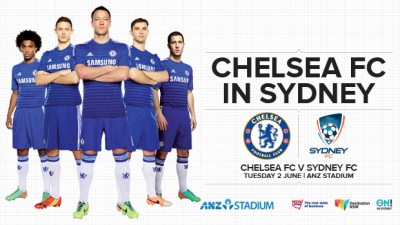 Massive numbers of fans have flocked to ANZ Stadium to see English Premier League clubs Chelsea and Tottenham Hotspur play Sydney FC, with crowds of 83,500 and 71,500 respectively attending the games in the past week.

The crowds hugely exceed those that watch Sydney FC or even A League grand finals, and crowds that watch Chelsea and Tottenham Hotspur at their home grounds – with Chelsea’s Stamford Bridge holding 42,000 and Tottenham’s White Hart Lane holding 36,000.

A training session held by Chelsea at ANZ Stadium on Monday (1st June) attracted 10,000 – on a night when the Sydney Roosters attracted just 8,200 for their NRL round 12 clash with Melbourne Storm.

Given both games were little more than exhibition games, the massive attendances confirm Sydney’s love of a big event as well as a growing desire to see European football’s major teams in Australia.

This also applies in Melbourne, were attendances at the Melbourne Cricket Ground for next month’s International Champions Cup games are already in high demand.

Tickets are still on sale for the MCG matches involving Real Madrid, Manchester City and AS Roma, but the Madrid v Roma game on Saturday 18th July and the City v Madrid game on Friday 24th July are likely to sell out.

The latter game is even being tipped to surpass the Victorian football record crowd of 95,446 that attended the Melbourne Victory versus Liverpool clash in 2013.

Liverpool's Commercial Director Olly Dale believes their match at a sold-out MCG in 2013 made some of the world's biggest clubs take notice of Australia and its thirst for top-level football. 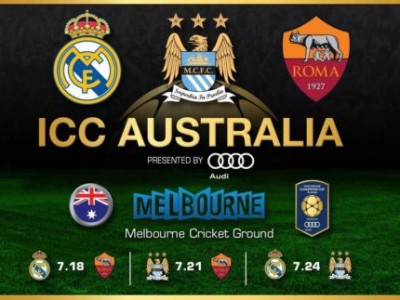 Dale believes Liverpool's clash with Melbourne Victory in front of 100,000 fans - days after the inaugural A-League All-Stars match against Manchester United - is partly responsible for the new wave of interest from abroad.

Earlier this year, Dale told the Sydney Morning Herald "(our) expectations were that we would sell between 50,000 and 70,000 seats.

"(We) were pretty flabbergasted when 100,000 tickets melted off the screen in a matter of hours."

Liverpool will again be in the country next month, taking on Brisbane Roar at Suncorp Stadium on Friday 17th July and Adelaide United at the Adelaide Oval three days later.

Both of those games are also expected to sell out such is the support for the Reds in Australia, but it is at the MCG where the biggest crowds will be.

The games at the MCG are also set to be broadcast globally to more than 150 countries.