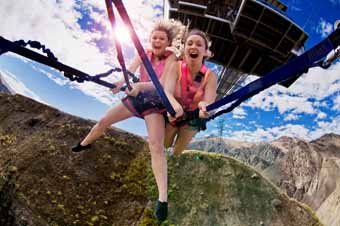 Adventure tourism leader AJ Hackett Bungy will mark '25 years of Bungy' next month and is celebrating by offering one lucky Australasian, and a partner or friend, the chance to join the party with a trip of a lifetime prize to Queenstown.

Launched this week, the adventure tourism leader is inviting Kiwis and Aussies to film a one-minute video or submit a 150 word blog outlining what they would do to win the 'Ultimate Queenstown Getaway' to join the team to celebrate AJ Hackett Bungy's 25th Birthday.

The competition prize includes return flights to Queenstown, courtesy of Air New Zealand, from any major city in New Zealand or Australia, four nights' accommodation in a lake view room at the Crowne Plaza, the opportunity to experience AJ Hackett Bungy Queenstown's activities including the Kawarau Bridge Bungy, Kawarau Zipride, Ledge Bungy, Ledge Swing, Nevis Bungy and Nevis Swing, one hour of power on a Jet boat ride with KJet, a ride up the Skyline Gondola, coupled with Luge rides at the top of the hill, Go-Karting at Highlands Motorsport Park in Cromwell, dinner at Fergburger and a night on the town with the Big Night Out Pub Crawl (all for two people).

Macpherson adds "now it's the turn of 'everyday Kiwis and Aussies' to step up to the platform.

"We know there are some adventurous souls out there and we're confident there'll be some whacky entries for this. We encourage people to think differently, get out there and do something awesome.

"After all that's what AJ Hackett Bungy is all about, pushing the boundaries, but safely of course." 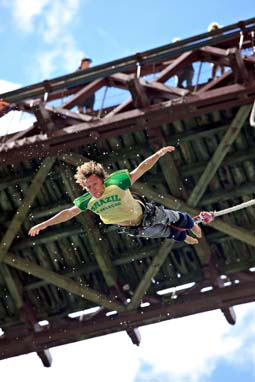 The prize will be won by the person who submits the most 'original' entry and the winner will be announced on 5th November 2013.

The 25th Birthday milestone will celebrate the many achievements and successes of the multi-award-winning adventure tourism company, known worldwide as the 'pioneers of bungy'.

As the official 'World Home of Bungy', Queenstown's historic Kawarau Bridge will be the focus of celebrations.

More competitions will be unveiled as the weeks go by for people to win amazing prizes including limited edition t-shirts and bungy jumps.

Another feature of the #25yearsofbungy campaign will be a series of special offers through the 25 days leading up to 12th November.

For more information go to www.ajhackettbungynz.pgtb.me/MHsrvQ