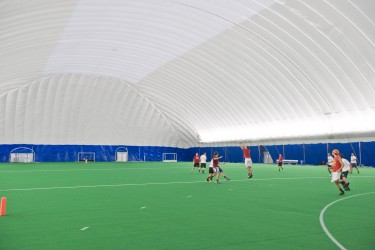 The fastest and most cost effective way to build a clear span building, Arizon Structures can be built in weeks, not months, a considerably lower costs than conventional construction.

Many Arizon Structure installations are permanent, year-round buildings, while Arizon Structures also offers seasonal and temporary flexibility according to the application.

Among recent Arizon Structures has been the construction of a covered facility for US Women's hockey in Manheim, Pennsylvania, USA.

The project started with a tight timeline for the facility to be ready for the upcoming season and involved design, manufacture and installing of an energy efficient facility that can handle the unique water-based nature of the special turf in field hockey.

Arizon installed the 67 x 112.5 metre, 7,560 metre² clear span facility, which features a full field hockey pitch and bleachers in just one week. To conserve energy the dome includes a centre skylight system, Triple wall system with premium insulation and a high efficiency HVAC system. Arizon's low-bias cable system maximizes safety during inclement weather and will prolong the lifespan of the facility. Finally Arizon provided the, in house made, state- of-the-art air rotation system capable of handling the extreme moisture in the air caused by the water based special turf.

The US Women's Hockey team was able to move their National Training Centre to Spooky Nook in time for their indoor season.

As of 2017, Arizon Structures are now distributed by Arizon Building Systems Australia. Click here to view their entry in the Australasian Leisure Management Supplier Directory.